Brickipedia
Register
Don't have an account?
Sign In
Advertisement
in: Class 3 articles, Kingdoms minifigures, Minifigures introduced in 2011,
and 2 more
English

The Stableboy[1], also known as the Boy,[2] is a minifigure from the Kingdoms theme released in 2011. He is exclusive to the set 7189 Mill Village Raid.

He has a freckled smiling face. His torso piece is light green, with markings of a green jacket over a grey shirt. His arms are grey and his hands are yellow. He has short legs, which are coloured brown. His hair is the same shape as Dastan's, although in a lighter colour.

The Stableboy lives in the Mill Village, where he presumably works at a stable. When the village is raided by Dragon Knights, the villagers fight back to defend their home. 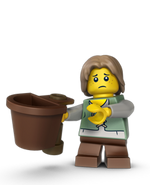