Brickipedia
Register
Don't have an account?
Sign In
Advertisement
in: Class 2 articles, Video game only minifigures, Marvel Minifigures,
and 3 more

Stan Lee features a Brick Yellow jacket similar to Aldrich Killian's, but with a white button-up shirt underneath. He features brown legs with a grey buckle printed on the hip piece. Stan's hair is both light grey and white. He has a flesh head with glasses, a mustache, bushy grey eyebrows and a smile printed on it. Like Adam West, he is an elderly figure.

Unlike most characters in the game, Stan Lee is not based on a fictional character. Instead, he is based on the former president and chairman of Marvel Comics. He is also known for co-creating numerous Marvel characters such as Iron Man, Spider-Man, Hulk and many others alongside Steve Ditko and Jack Kirby. He was seen escaping the Raft along with other villains in LEGO Marvel for unknown reasons. He also shows up multiple times throughout both games' hubs and levels, needing the player's help to be rescued. Rescuing every Stan Lee in each game will unlock him for play. Stan Lee died on November 12th, 2018 at the age of 95.

As the creator of the characters, Stan Lee has over half of the in-game abilities. He can transform into a Big-Fig, and has the powers of Hulk, Spider-Man, Wolverine, Cyclops, Human Torch, Magneto, and Mister Fantastic, plus Telekinesis and mind control.

In LEGO Marvel Avengers, Stan has the powers of Captain America, Hulk, Hawkeye, Scarlet Witch, Quicksilver, Daredevil; as well as possessing a S.H.I.E.L.D. scanner. He can also transform into an Iron Man-inspired suit (Iron Stan), as well as one based on the Hulkbuster (the Stanbuster).

Stan Lee beside his videogame counterpart 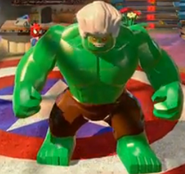 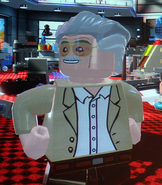