Star-Lord, also known as Peter Quill, is a Marvel Super Heroes minifigure that appeared in 2014 as part of the Guardians of the Galaxy line.

Peter Jason Quill, also known as Star-Lord, is a half-human and a half-celestial who was abducted by the Ravagers. He was born to his mother, Meredith Quill and to his father, Ego. After his abduction, he began building a name ("Star-Lord") for himself as a legendary outlaw, eventually becoming the founder and leader of the Guardians of the Galaxy team.

Deciding to leave the Ravagers, he stole the Orb, unintentionally becoming a part of the Quest for the Orb. During the Quest, he formed an uneasy alliance with Gamora, Drax the Destroyer, Rocket Raccoon, and Groot, and helped stop Ronan the Accuser from destroying Xandar. 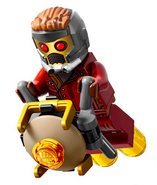 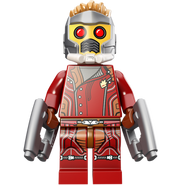 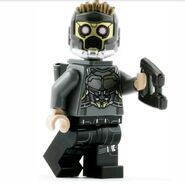