The Star Wars Miniland is an area of The Beginning opened in March 2012 on the site of the old LEGO Creation Centre. It contains seven sections depicting eight separate planets from the seven Star Wars films. At the end of the experience there are giant LEGO models of R2-D2, C-3PO, Chewbacca and Darth Vader in a LEGO Star Wars shop. 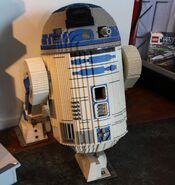 Giant Darth Vader
Add a photo to this gallery

The first area depicts a scene from the animated series The Clone Wars on the planet Christophsis. Chronologically, the series takes place between Episode II and Episode III and focuses on the adventures of Jedi Knights Anakin Skywalker and Obi-Wan Kenobi. The LEGO scene depicts part of the planet’s surface and the largest of all LEGO Star Wars models: an approximately 8-foot tall building from the Crystal City. It also includes Asajj Ventress' ship with droids attacking the Clones protecting the Crystal Palace. The display has changing lighting which lights the sets up in different colors.

Three AATs, an Octuptarra Tri-droid and many Super Battle Droids attacking the Clones

The AV-7 Mobile Cannons
Add a photo to this gallery

Naboo is one of the most geographically varied planets in the Star Wars galaxy. This scene depicts the Battle of Naboo and the capital Theed, containing both the Royal Palace with six statues in front of the entrance and the hangar. In this battle scene, Obi-Wan Kenobi and Qui-Gon Jinn encounter and fight the Sith apprentice Darth Maul. Inside the palace hanger there is an animated Naboo Star Fighter, battle droids, droidekas, and assault vehicles and Armoured Assault Tanks attacking the native Gungans riding Kaadu birds and Fambaas.

A hangar in Theed

A Gungan riding a Kaadu

Gungans going in to battle

The Battle of Naboo

In this scene, visitors have a fantastic view of the Geonosis arena in which Padmé Amidala, Obi-Wan Kenobi and Anakin Skywalker battle ferocious creatures such as the catlike Nexus and vicious Acklay. Anakin is riding a wild Reek that he tamed with the Force. Count Dooku’s droid army and the Grand Army of the Republic are clashing, with Clones jumping out of Republic Gunships. Vehicles include the LAAT and AT-TE ships.

Clone Troopers from the Grand Army of the Republic (GAR)

Droids going into battle
Add a photo to this gallery

In this scene, two planets are revealed: Kashyyyk and Mustafar. On one side is the Battle of Kashyyyk – the home of Chewbacca and the Wookiees. There are many vehicles in this scene such as the massive Clone Turbo Tank attacking the Seperatist Gunship and the spider and Tank Droids invading the beach. On the other side is the fateful duel on Mustafar between Obi-Wan Kenobi and Anakin Skywalker taking place while R2-D2 and C3PO wait by a Star Skiff. R2-D2 has changing coloured lights.

The Clone Turbo Tank and the Wookiees

The droids advance on the Wookiees

The display with the background

Anakin duels Obi-Wan Kenobi
Add a photo to this gallery

Luke Skywalker, Obi-Wan Kenobi, C-3PO and R2-D2 can be spotted in this desert planet of Tatooine. The scene contains Uncle Owen’s moisture farm where Luke Skywalker lived as a child, the Cantina where the animated Cantina Band plays and the spaceport where the largest LEGO model of Han Solo's famous starship, the Millennium Falcon, sits ready for take-off.

A group of Tusken Raiders with a Bantha

A Stormtrooper riding a Drewback

On the icy planet of Hoth, the Rebels take refuge but the Empire tracks them down and the Rebels are forced to flee. This scene features LEGO models of the Imperial AT-ATs, Rebel snowspeeders and Luke Skywalker’s X-wing starfighter. It also includes Luke Skywalker, Han Solo and Princess Leia as well as a giant Wampa minifigure.

The Rebel Alliance fights the Galactic Empire on Hoth

Endor is a forest moon and home of the Ewoks, who fight against the Imperial forces alongside the Rebels. The Endor system plays a key role in Return of the Jedi as the site of the Battle of Endor, fought to prevent construction of the second Death Star. This scene presents the final victory of the Rebel Alliance over the Empire with an Imperial shuttle on its landing platform, delivering a fearsome passenger, Darth Vader, and Yoda hiding among the trees.

The Ewok Tree Village on Endor

Darth Vader and the Imperial Shuttle

The Imperial Shuttle on its landing platform

An AT-ST walker and a Scout Trooper on a speeder bike
Add a photo to this gallery
Retrieved from "https://brickipedia.fandom.com/wiki/Star_Wars_Miniland?oldid=1562909"
Community content is available under CC-BY-SA unless otherwise noted.
... more about "Star Wars Miniland"
RDF feed
ArticleRating
3 +