Koriand'r, or alias Starfire, is a DC Comics Super Heroes minifigure who appears in LEGO Batman 3: Beyond Gotham and LEGO Dimensions. She physically appears in two sets, the LEGO Dimensions 71287 Starfire Fun Pack and the DC Comics 76035 Jokerland set, along with two of her fellow Teen Titans members, Beast Boy and Robin. She also has a speaking role in LEGO DC Comics Super Heroes: Justice League: Gotham City Breakout.

Starfire has a tan face and a pink wavy hair piece. Starfire's torso is purple with some of her stomach showing and part of her belt. Starfire has purple skirt with the other half of her belt showing. You can see more of her skin on her legs and also her legs include boots.

Princess Koriand'r of planet Tamaran became the victim of a peace treaty when her homeworld was invaded by a cruel alien race called the Citadel. Sent off as a slave by her sister, Princess Komand'r, she endured several years of harsh treatment before she and her sibling were captured by the Psions, whose experiments gave them the ability to shoot solar blasts (in addition to Tamaraneans' natural flight, which only Komand'r lacked). Koriand'r escaped the Psions' jailers and the Gordanian bounty hunters searching for her, and eventually found herself on Earth where she joined the Teen Titans alongside Robin (Dick Grayson,), Kid Flash (Wally West), Wonder Girl (Donna Troy), Beast Boy and Cyborg.

Despite her conspicuous appearance, Koriand'r took an Earthen alias as a fashion model named Kory Anders (more for social purposes than secret identity) and a superhero name as Starfire (the Earthen translation of her real name). As a fellow Teen Titan, she fought alongside her new friends against numerous enemies such as Deathstroke, Brother Blood, Trigon the Terrible, and her own sister (Blackfire, as referred on Earth). She even had a long-lasting romantic relationship with Dick Grayson, now known as Nightwing, which fuels her devotion and selflessness to help others in need.

Because she is not of Earth, she has had to learn all of its customs, languages, and traditions in a short time so to blend in. Although she still struggles with culture-shock, she is much smarter, wiser, and stronger than her innocent nature lets on. Although she adores every little good thing on Earth with a passion, any danger to them can potentially drive her powers to match her name. Her power and personality make her not only one of the most formidable Titans and superheroes, but one of the best allies and friends any superhero can have. 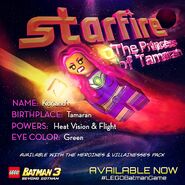