Stargirl is a Super Heroes minifigure who appears in LEGO Batman 3: Beyond Gotham.

Stargirl has long, blonde hair and a light nougat face. Her face printing is a blue mask and a smirk with light pink lipstick, with an alternate printing featuring a smile with visible braces. Her torso and arms are blue with red hands and white stars emblazoned three times on each arm. On her torso she has a blue top with a white star insignia, with a red belt, abs printing and black curve detailing. She has a blue waist with white stripes on the legs, and black boots. Her primary accessory is the Cosmic Rod, made up of a golden rod piece and a translucent orange piece adorning the top.

In her LEGO Batman 3 variant, her uniform is dark blue and she has a different hair piece, as well as a differently-structured Cosmic Rod.

Courtney Whitmore is Stargirl, a junior member of the Justice Society of America. Initially a fairly normal teenage girl, Courtney's life changed forever when she learned that her step-father Pat Dugan was Stripesy, the adult sidekick of retired hero Star-Spangled Kid. Taking the Star-Spangled Kid name to annoy her stepfather, she began fighting crime, prompting Pat to build a suit of armor to keep her safe in her endeavors, dubbed S.T.R.I.P.E. The two would ultimately join the reformed Justice Society.

After fellow JSA member Jack Knight retired as Starman, he passed the Cosmic Staff on to Courtney. She renamed herself Stargirl, and now carries on both the legacy of Star-Spangled Kid and Starman. Since then, she has also worked as a member of the Justice League, in addition to accompanying experienced heroes Martian Manhunter, Green Arrow, Supergirl and Adam Strange on interstellar adventures.

The character currently stars in the CW live-action television series Stargirl, in which her origin is slightly reworked. In this series, Courtney's father is Sylvester Pemberton, the hero Starman (formerly Star-Spangled Kid) and a member of the Justice Society. After the JSA was massacred by the Injustice Society, the dying Pemberton entrusted his sidekick Pat Dugan (Stripesy) with the Cosmic Rod, telling him to keep it safe from the ISA. Years later, after Courtney's mother married Dugan, Courtney discovered the Cosmic Rod in her house's basement, harnessing its power for the first time. With her step-father guiding her, she seeks to form a new incarnation of the Justice Society, alongside new iterations of Wildcat, Hourman and Dr. Mid-Nite. 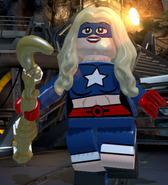