An unidentified station guard was employed at King's Cross Station in London from the 1990s to the 2000s. 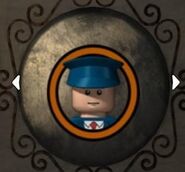