"I tried to think of the most harmless thing, something I loved from my childhood.. Something, that could never ever possibly destroyed us! Mr. Stay Puft.. "
―Ray after accidentally choosing the form of destroyer in Ghostbusters (1984)

Stay Puft is a character from Ghostbusters who will appear in LEGO Dimensions.

The Stay Puft Marshmallow Man is mainly white, with a red tie printed on his torso. His head incorporates the character's marshmallow-shaped head as well as his sailor's hat and collar. His eyes are sunken and give the impression of a blank stare, while his mouth shows a happy expression.

Stay Puft was originally a mascot for a marshmallow brand. When the demonic force Gozer came to earth, it challenged the Ghostbusters to choose the form it would take as the Destructor. While most of the team avoided thinking of anything, Ray Stantz accidentally thought of the Stay-Puft Mascot, prompting Gozer to use it as its Destructor form. 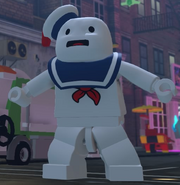