The Stegosaurus (Steg-oh-sore-us) is a Dinosaur that first appeared in 2000 in the Adventurers Dino Island theme. The Stegosaurus from that theme were produced with brown bodies but with different colored legs: either Orange or Grey.

A Stegosaurus with an updated appearance also appears in the video game LEGO Jurassic World. There are also various stegosaurus LEGO Creator sets.

The Stegosaurus appears in LEGO Jurassic World, in the level InGen Arrival. It is first encountered near the river when Ian, Nick and Eddie are looking for Sarah. Sarah pops up in one of Nick's pictures and gives him a scare. Sarah follows the herd to see the infant. When Sarah photographs the infant with a flashlight the baby and the entire herd is scared and attacks. Sarah and Nick must shelter in a tree trunk, which the Stegosaur attacks with its tail spikes. After this has been repeated three times, the adult walks away with the rest of the herd.

In the Hunter's camp and adult and infant Stegosaur is captured. Nick and Sarah must first release the adult. Then the adult can be used to break the infant's cage and set it free. 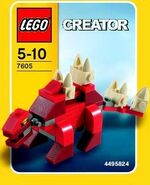 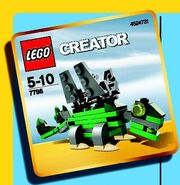 A stegosaurus in LEGO Racers 2