Steve is a Micro Mob and Minifigure from the Minecraft theme. He is Minecraft's default Player Skin (Avatar). Although he is called Steve on the LEGO website, Notch has stated in the past that his name is spelled as "Steve?" since officially, he has no name and is referred to only as "The Player". As of the 1.8 update, the player may also have the default skin Alex.

In the game. The Player is the character that users control in Minecraft, and is generally considered the unofficial main protagonist of the game. The two default player skins are known as Steve, a name suggested by Notch as a joke and confirmed on the 'Profile' page near the section that allows you to change your skins, and Alex, a new skin implemented in 1.8, with all unchanged skins being split between the two default skins. In the End Poem, after beating Minecraft you are called a player.

Steve consists merely of five small pieces, stacked directly atop each other. A black 1X1 plate represents his legs, and a blue 1X1 brick his body. Two tan 1X1 parts, are each printed with a section of his features, and put atop each other to form his face. A reddish-brown 1X1 tile is used as his hair.

Steve consists of a special moulded head, with a printed/sticker face. There is also a teal torso and navy blue legs.

Steve looks the same as his regular minifigure variant, but with the addition of a special pickaxe accessory, and armour. A knight armour piece fits in between the head and torso and represents iron armour.

Steve found himself in a mysterious world filled with various strange creatures called Mobs, where he attempted to survive, gathered resources, and built magnificent structures.

CGI of Steve and a Creeper

"Jeb" (lead developer of Minecraft) with a Steve Micro Mob

Steve as a minifigure 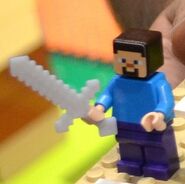 With a prototype Sword

Final minifigure designs of Steve and a Creeper 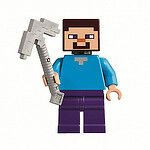 A front view of the final Steve figure 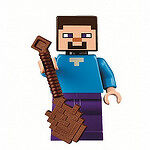 The final Steve figure with a wood shovel 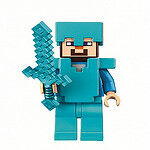 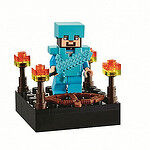