Stinky Pete the Prospector is the main antagonist of the 1999 movie Toy Story 2. This page is on his minifigure from the Toy Story theme.

He features short, non-moving legs and a unique head mould with a non-removable hat.

Stinky Pete was the antagonist of the second Toy Story movie. A bitter, resentful old toy, he has spent his entire existence in mint, sealed condition, sitting on the shelf watching other, cooler toys getting sold instead of him. He eventually became part of the collection of Al, owner of Al's Toy Barn, who was trying to assemble a full set of Woody's Roundup characters to sell to a Japanese museum. When Al steals Woody to complete the set, Pete convinces Woody that this is where he belongs, and that Andy can't love him forever - but that in the museum, he'll delight kids forever. When Woody decides to return to Andy anyway, Pete loses patience and forces him into the packing crate. At the airport, Woody is rescued by Buzz Lightyear while Stinky Pete gets trapped in the backpack of a young child. 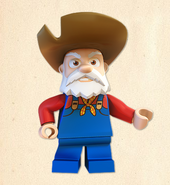 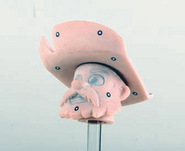 A prototype of Stinky Pete's head

Retrieved from "https://brickipedia.fandom.com/wiki/Stinky_Pete?oldid=1921170"
Community content is available under CC-BY-SA unless otherwise noted.