A Stormtrooper is a minifigure first released in 2001, and is based on the Stormtrooper from the Star Wars universe.

Stormtroopers have been featured a wide variety of sets in the Star Wars Theme, and have been redesigned with more detail and fixed details many times.

Although the standard Stormtrooper looks almost the same in every set they have been released in, over the years, they have been slightly redesigned multiple times. The helmet has five different variations.

One of those variations appeared in the 7264 Imperial Inspection set, where they had more detailed shin plates. The set featured four troopers with previously unused leg detail, having increased detail of the utility belt and knee plates over the usual blank legs.

There are currently five variations of the LEGO Stormtrooper helmets: One with two mouth grills split into halves, the second with a single black mouth grill, and the third with a thick, gray mouth grill with small black lines, the fourth with a thick gray mouth grill separated by small black lines and with a black outline around it and the fifth and latest one, which features exaggerated mouth printing to more closely resemble the Stormtroopers in Star Wars: Rebels. The eyes have also been enlarged gradually throughout the years.

In 2009, a special edition silver Stormtrooper was released as a magnet set to commemorate 10 years of LEGO Star Wars. It was later released as a promotional minifigure at Toys "R" Us.

Stormtroopers have appeared in three out of the four LEGO Star Wars Video Games, although in LEGO Star Wars III: The Clone Wars, the player must complete 10 Minikits in a level.

The Imperial Stormtroopers were the nameless, faceless, loyal soldiers of the Galactic Empire. They were formed after the reformation of the Republic from Clone Troopers. The Clones were given new armor and soon non-cloned humans were allowed to join the Stormtrooper ranks after graduating from the Imperial Military Academies across the galaxy. Stormtroopers are the most common unit in the Empire, seen on many planets as the footsoldiers. 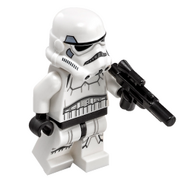 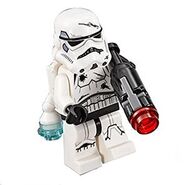 In 2016, LEGO released a new battle-damaged Stormtrooper minifigure with a jet pack for Star Wars: Battlefront

A Stormtrooper in LEGO Star Wars II: The Original Trilogy 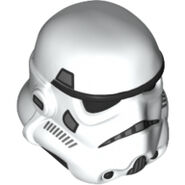