This article is about the minifigure. For the online game, see Street Skater (game).

"This is the perfect spot for an awesome new stunt!"
―Street Skater

The Street Skater is a Collectable Minifigure that was released in 2011, as a part of 8804 Minifigures Series 4.

The Street Skater has a dark grey beanie with a lime green brick logo. He has glasses, eyes, eyebrows, and a smile as head markings. The Street Skater has a light grey printed torso and dark tan legs. His torso depicts a sweatshirt that with the orange zip halfway down and a black shirt with orange markings underneath. At the top back of his top is markings for a hood. He also comes with a black skateboard with blue printings of a city on one side and a 2x2 lego brick with wings behind it at the back. 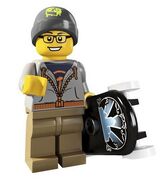 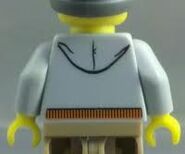 The backprinting on the Street Skater