Sulfurix is a type of Rock Monster in the year 2009 from the Power Miners line. Much like Meltrox, Sulfurix has only appeared in three LEGO sets. It is assumed by its colour and name that it is made of Sulfur.

Like every rock monster similar to it, Sulfurix has been designed with three of the same features minifigures have: detachable arms, hands that have the ability of holding any objects minifigures can, and feet that can attach to any LEGO stud. Apart from this, the figure possesses other unique features. The arms, as well as everything else, are designed to match the rock world of these creatures, and are not curved like that of minifigures. Sulfurix's head is made to resemble stones. This piece holds the eyes which are small red and black markings, as well as the two teeth that are visible, when opened, on the left corner. The head has connections in the rear that allows it to attach to the main body of the Rock Monster. The purpose of the hinges is to permit the head to open, the head then serving as a mouth-like feature, revealing the hollow inner portion that can be used for the placing of crystals. The front portion of the head is not flushed with the front portion of the body. The body of the rock monster is covered with fragments of of rock, with the trans colour in the space the rock does not occupy. At the bottom, there are two legs. These do not move. Each are are not joined together, but are both connected the the body.

In its underground world, Sulfurix is a clever and sly creature, and appears where least expected. The special ability of this rock monster is tunnelling through rock, a process which is accomplished by the creature's power to melt through it. Crystals, the choice food of Rock Monsters, can be eaten very quickly by Sulfurix.

Sulfurix has to be unlocked to play in Rock Rocket like Boulderax. His code is yellow x5. 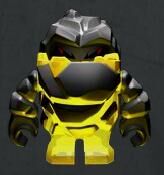 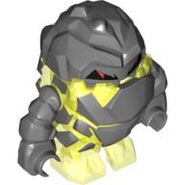 A CG image of Sulfurix