The Super Battle Droid is a Star Wars minifigure. It is an advanced version of the standard B1 Battle Droid.

The Super Battle Droid stands taller than most other mini-figures. It consists of a single piece for the torso, a single piece for the legs, and two parts for the arms. All sections but the leg part are exclusive to the mini-figure, as its unique design cannot be matched by standard components. Three variants were made, each one differing very slightly from the last.

The first Super Battle Droid was released in 2002 and was coloured metallic pearl blue. The torso was large and wedge-shaped with four horizontal grooves on the lower half. The upper half is smooth and slightly rounded. The "head" of the droid does not stick out or protrude like minifigure or normal battle droid heads; rather, it sits at shoulder level, with no neck. Two slightly raised sections near the shoulders flank the head.

The arms are identical and have two grips, one one each side, with a circular section representing a hinge near the middle. This immobile "hinge" is closer to one end than the other, depicting a shorter upper arm than the forearm. The forearm is narrow near the front grip and widens as it approaches the hinge. A small tube is located on the arm, representing the arm-mounted repeating blaster with which the droids are equipped.

The legs and feet consist of a single piece. The legs are narrow from the front, have square-like calves and have one joint at the knee; however, the feet are connected at the bottom and the knee joints are immobile, allowing for only the limited movement of bending at the waist.

The third and as of yet last version released was introduced in 2009. This, too, was very similar to its predecessor. The difference is in the left arm: instead of the standard small blaster, the forearm is the gun. At the elbow joint the arm becomes cylindrical and extends farther than the other one representing the rocket launcher some special Super Battle Droid models possess.

B2 Super Battle Droids were a key part of the CIS military. They were specialized battle droids encased in thick shells of armour and equipped with heavy weapons. Their strong, bulky exterior made them difficult to take down. That, coupled with their wrist-mounted repeating blasters and missile launchers, made them extremely valuable on the battlefield. It also made them rather expensive to create, which is why they were never mass-produced in numbers rivaling the more basic B1s. Unlike their less powerful counterparts, which often served other functions like that of a pilot, B2s were designed for combat and nothing else. B2s rarely, if ever, spoke, and marched on the front lines, often acting as shields for the B1s behind them. They were known to destroy everything in their path, including other droids, to reach their quarry. They were occasionally painted in camouflage for dense jungle planets and were sometimes modified to carry heavy missile launchers. Super Battle Droids were utilized by the CIS at all points in the Clone Wars from beginning to end. 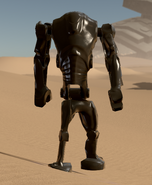