Supergirl (born Kara Zor-El) is a Super Heroes minifigure who first appeared in LEGO Batman 2: DC Super Heroes and LEGO Dimensions. She was physically released in 2015. An exclusive version of Supergirl from the TV series of the same name released as part of a virtual raffle at DC Fandome on August 22, 2020.

Supergirl has Elsa Schneider's hair in the same colour. Her torso is blue and has the same "S" shield as Superman and wears the same belt. Her cape is also identical to the one used by Superman's video game counterpart, with the "S" shield on the back. She wears a red skirt and boots. Her face is the same as the Scarlet Witch with one side normal and the other that has an angry expression with red eyes.

The physical version of the TV variant is based on an updated version of the outfit that was introduced in Supergirl's fifth season where it is modeled after Superman's suit. In addition, Kara sports a blonde shag and red lips.

Kara Zor-El is Superman's teenage cousin who was sent to Earth at the same time as baby Kal-El to watch over him and help raise him. However, she was cryogenically frozen in space and didn't age. Years later, when Kal-El was now an adult and a superhero using the name Superman, Kara landed on Earth, still a teenager. She gained powers from living under "a yellow sun" and became her cousin's partner, Supergirl.

Unlike Superman and Batman who do not get along, Supergirl is close friends with Batgirl.

In LEGO Batman 2: DC Super Heroes, Supergirl requires all 250 Golden Bricks to unlock on consoles. On portable versions, she is unlocked for purchase by finding the fifth minikit in Robot Sky Battle and costs 150,000 studs.

Unlike her famous cousin, Superman™, who was raised from infancy by his adoptive parents on Earth, Kara Zor-El™ was already a teenager when she arrived from the dying planet Krypton™. As Supergirl™, Kara has all of the same powers as Superman, including super-strength, super-speed, super-breath and flight. She also has enhanced senses, such as heat vision, X-ray vision and super-hearing. But unlike her cousin, who learned to use his powers as he grew up on Earth, Supergirl is still learning to master her superpowers. 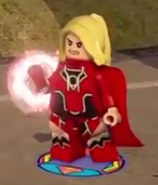