The Surfer has a yellow muscular torso as well as yellow arms and hands. He has light blue hips and yellow legs with printing that depicts a blue and black swim suit design with white flowers on it. His head is yellow with beard stubbles, a large grin, eyes, and eyebrows. His hair is the same shape as the Skater and the Soccer Player, except is coloured tan. Also included is a white base-colour surfboard with printings of a palm tree with a orange background at the top and a white flower at the bottom with a black background. He also comes with a base to stand on.

In The LEGO Movie, the Surfer appears as a citizen of Bricksburg and is named "Surfer Dave". He is first seen when Emmet says hi to him as he is polishing his surfboard. Later, when asked by the Super Secret Police about Emmet, he tells him that he has no idea who he is, much to Emmet's dismay.

In The LEGO Ninjago Movie, the Surfer can be briefly seen at the beach during Garmadon's arrival to Ninjago City. 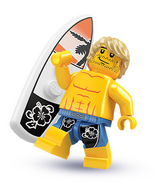 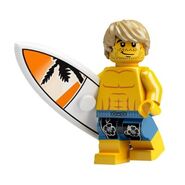 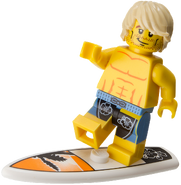 The Surfer on his base.

Deutsch Français
Community content is available under CC-BY-SA unless otherwise noted.
... more about "Surfer"
RDF feed
Accessories
Surfboard (White) +
Appearances
8684 Minifigure Series 2
850449 Minifigure Beach Accessory Pack
70840 Welcome to Apocalypseburg! +
ArticleRating
2 +
Image
Surf1.jpg +
Img1
Surf1.jpg +  and Movie Surfer.png +
Img2
70840 (12).jpg +  and Snapshot8888882.jpg +
InfoboxTemplate
Minifigure +
ShopDescription
“G’day, dudes and dudettes!”
W … “G’day, dudes and dudettes!”<br />Wherever the waves are radical and the surf is bodacious, that’s where you’ll find the Surfer. He’s the most relaxed guy around, but as soon as it’s time to hop on his surfboard, nothing can keep him from hanging ten from sunrise until sunset!The Surfer has traveled all over the world and surfed at every beach he can find. No matter where he goes, he’s always sure to find a fun challenge on the rolling, splashing ocean!challenge on the rolling, splashing ocean! +
Theme
Minifigures
Series 2 +
Title
Surfer +
Txt1
Regular +
Txt2
Apocalypse +
Years
2010-2019 +
Advertisement