Brickipedia
Register
Don't have an account?
Sign In
in: Class 4 articles, Minifigures (theme), Minifigures introduced in 2011,
and 3 more
English

"The best wave is always the next wave!"
―Surfer Girl

The Surfer Girl is a Minifigure that was released in 2011, part of 8804 Minifigures Series 4. She has a dark orange ponytail, and wears a black and pink wetsuit. She also has a surfboard, similar to the Surfer's, but has pink fire on it. She also has the same hairpiece as the Nurse, the Tennis Player, the Zookeeper, the Skater Girl, the Judo Fighter and the Downhill Skier 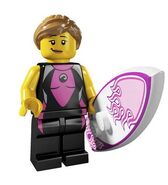 Deutsch Français
Community content is available under CC-BY-SA unless otherwise noted.
... more about "Surfer Girl"
RDF feed
Accessories
Surfboard (White) +
Appearances
8804 Minifigures Series 4
850449 Minifigure Beach Accessory Pack +
ArticleRating
4 +
Image
col053.jpg +
InfoboxTemplate
Minifigure +
ShopDescription
“The best wave is always the next wave! … “The best wave is always the next wave!”<br />The Surfer Girl loves everything about the ocean, from the biggest sandy beach to the tiniest tropical fish. She’s happy just to be in the water, and she’s even happier still when she finds a new surfing challenge to test her skill.As long as the sky is clear and the surf is wild, the Surfer Girl can be found right in the middle of her element, riding the tallest wave she can find and whooping at the top of her lungs the whole way back to the beach. And as soon as she reaches the shore, she runs right back into the water to chase the next big splash!to the water to chase the next big splash! +
Theme
Minifigures
Series 4 +
Title
Surfer Girl +
Years
2011 +