Brickipedia
Register
Don't have an account?
Sign In
Advertisement
in: Class 4 articles, Minifigures (theme), Minifigures introduced in 2012,
and 3 more
English

The Surgeon is a Collectable Minifigure released in 2012 as one of the sixteen minifigures from 8827 Minifigures Series 6.

The Surgeon comes with a new hair net piece that is a light aqua colour. Her head piece is like most minifigures is yellow but covers up her mouth with a white mask. Her torso is medium azure and has printed wrinkles on it. She comes with the first medium azure legs. For her accessories she comes with a syringe piece that appeared in Series 1 and a new printed 2x2 X-Ray piece. On the X-Ray piece it shows the bones of a minifigure possibly from skeletons.

In The LEGO Movie, it appears as a male surgeon rather than a female like in the physical minifigure. The Surgeon is among the Master Builders to meet in Cloud Cuckoo Land. Emmet is also briefly seen dressed as one when he is getting ready to start the day.

In The LEGO Movie 2: The Second Part, the surgeon makes a cameo appearance when Rex Dangervest states that one of his many options is being a "Script Doctor" with the Surgeon character looking confused next to him. Here, the surgeon is back to being a female, just like she is in the Collectable Minifigures series. 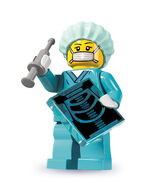 The Surgeon on her stand

Appearance in The LEGO Movie, but it appears as a male instead of a female. 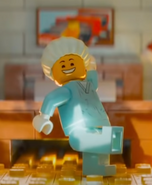 Emmet dressed as a surgeon

Cameo Appearance in The LEGO Movie 2: The Second Part next to Rex Dangervest.