Syrena is a Pirates of the Caribbean minifigure that was released in the 2011 set, 4194 Whitecap Bay. She and Tamara have new mermaid tail pieces.

Syrena has long flowing, dark brown hair, the same as Elizabeth Swann's. She has a new blue tail with dark-blue scales along with a matching blue torso. She has light brown lips and has a flesh area on her tail, depicting where the torso connects with the tail. Her face has the faces: sad and crying, and her true mermaid face, with gills and scales on her face.

In the video game, she is unlocked in the level The Fountain of Youth in On Stranger Tides. She is played the same as any other character, except the offence button makes her whip with seaweed, and The action button makes her Scream. Her scream is attractive to anyone who comes close. On land, she walks on two sand blue Legs, but when she begins to wade through water, she instantaneously grows a tail. She has long flowing brown hair, a smiling face when normal, but when she, uses her whip/seaweed, screams, or is left undisturbed, she has gills and scales on her face. Her torso is the same as in the set.

Syrena was a beautiful and alluring young mermaid. She was one of many who were involved in the quest for the Fountain of Youth. Not much is known about Syrena's early life. Syrena wasn't a typical mermaid, while the other mermaids are quite dangerous, she was rather timid. During Jack Sparrow's search for the Fountain of Youth, she was kidnapped by the Crew of the Queen Anne's Revenge on Blackbeard's orders, as they need a mermaid's tear in order to make the Fountain work. At some point during the search, Syrena fell deeply in love with a young missionary named Philip Swift, who also served as Blackbeard's captured slave. She is the one to deliver the silver chalices to Jack so he can save Angelica, and she ends up kissing Philip Swift, which protects him from drowning, meaning she can then drag him underwater without him dying. 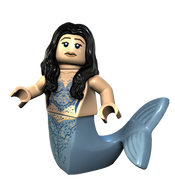 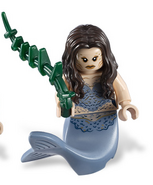 The minifigure, showing the alternate side of Syrena's face

Syrena's game token
Add a photo to this gallery

Retrieved from "https://brickipedia.fandom.com/wiki/Syrena?oldid=1921314"
Community content is available under CC-BY-SA unless otherwise noted.