T7-O1 is a T7-series Astromech Droid minifigure based on the astromech droid of the same name who appears in the Star Wars Expanded Universe.

Each one of the Astromech Droid legs connect to a dark grey 1x1 brick with TECHNIC holes and a dark grey 1x2 modified grille brick behind it. Beneath these sits a light grey 2x2 thin wheel holding piece with a small dark grey wheel attached. Above the interior of the T7-O1's body sits a light grey piece and two golden studs. Attached to the front of this piece is a 2x2 plate with unique printings of the droids exteriors. To support the structure on top sits a round dark grey 2x2 plate and a 1x1 golden stud which joins to the head of T7-O1. T7-O1's minifigure head is represented by 3x3 inverted dish piece with a 2x2 inverted dish piece attached above both in dark grey. Both these pieces also have unique printings of the droids eyes and head circuitry.

T7-O1 was a T7-series astromech droid. T7 served many human and Jedi companions during the time of the Great Galactic War and the Cold War. He assisted in the escape of Satele Shan and Jace Malcom during the Fall of Korriban. The astromech droid was also present during other events such as the Sacking of Coruscant, an attack led by Darth Malgus and a team of Sith forces. T7-01 would later travel to the Jedi Order's original homeworld of Tython; where he would encounter, and eventually team-up with, a young Jedi Knight who would go on to become the Hero of Tython. T7 participated in the defeat of the Sith Emperor. About five years later, he, along with the Sith Lord Lana Beniko, rescued a galactic hero known as the Outlander from carbonite on the planet Zakuul. Later he aided the Outlander with tracking down the Lady of Sorrows, fighting Emperor Arcann on Asylum, and forming the Alliance on Odessen. 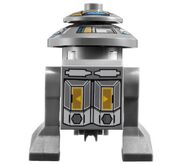 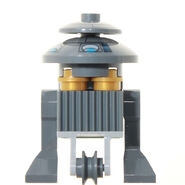 Debut at NYC Toy Fair
Add a photo to this gallery