TC-14 is a droid with printing much like C-3PO's. She is mainly silver, with grey hands and orange optical sensors. Printing of a restraining bolt is on the left side of her chest. In the center of her stomach is a circular pattern shared by all protocol droids. In between her hip and stomach printing are exposed wires of blue, red, white and yellow. Wires can also be seen in the lower back area, below a rectangular plate in the center.

Her master was Nute Gunray, viceroy of the Trade Federation, and TC-14 was often used to distract visitors from Gunray's true evil. She was notably used to distract Qui-Gon Jinn and Obi-Wan Kenobi while Gunray consulted with Darth Sidious about the arrival of the Jedi. When the latter ordered to dispose of Obi-wan and Qui-Gon, The viceroy filled the room where the Jedi were with dioxide. When a party of Security Battle Droids came to "destroy what's left of them", TC-14 was seen emerging from the hazy room, shortly after, the Master and apprentice took care of the droids and escaped the ship. 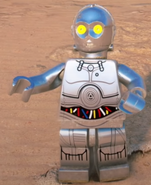