Brickipedia
Register
Don't have an account?
Sign In
Advertisement
in: Class 4 articles, Movie only minifigures, The LEGO Movie Minifigures,
and 2 more

TV Presenter is a minifigure who appeared in The LEGO Movie. He is a caricature of his voice actor Chris Miller who was one of two directors of The LEGO Movie.

In The LEGO Movie, the TV Presenter made a cameo appearance in "Where are my Pants?" Studio. He and Phil Lord are also briefly seen celebrating with the Master Builders and the citizens of Bricksburg at the end of the movie. He is also seen in the "Bloopers" of the movie. 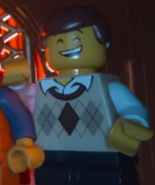 Appearance in The LEGO Movie Bloopers.