Taco Tuesday Man is one of the characters in the 2014 film, The LEGO Movie. 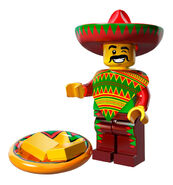 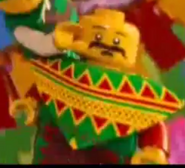 Deutsch Français
Community content is available under CC-BY-SA unless otherwise noted.
... more about "Taco Tuesday Man"
RDF feed
Accessories
Plate
Tacos
Sombrero (Red) +
Appearances
71004 The LEGO Movie Series
The LEGO Movie +
ArticleRating
3 +
Image
Taco_Tuesday.jpg +
InfoboxTemplate
Minifigure +
ShopDescription
“If only it could be Taco Tuesday every da … “If only it could be Taco Tuesday every day!”</br></br>The Taco Tuesday Man makes the tastiest tacos in town. They’re the most irresistible treat in all of Bricksburg, and people come from far and wide just to take a bite of their mouth-watering crunchy, zesty goodness.</br></br>Even President Business is a big fan. That’s why he’s declared a city-wide Taco Tuesday when every rule-following citizen will gather outside to get a free taco. The Taco Tuesday Man sure is glad people like his tacos so much, and that it isn’t all part of some secret evil scheme to control the entire world!t evil scheme to control the entire world! +
Theme
The LEGO Movie +
Title
Taco Tuesday Man +
Years
2014 +
Advertisement