Yeah. Also, what should we rename Batman? The caped crusader or the dark knight? And Superman should be Man of Steel. Oh, and it should be Robin the Boy Wonder. Joker should be the clown prince of crime too...and Harley Quinn the princess. Oh wait, LEGO calls him Hulk, that's right. The ultrabuild is called Hulk. His name is Hulk in the press release too. As for those DC characters, press release and set descriptions do not call them that. --Berrybrick (Talk) 21:57, February 3, 2012 (UTC)

Hulk's background needs fixed. Although it might match up with the comics, this Hulk is taken from the Marvel Cinematic Universe, as evidenced by his appearance in the Avengers sets. This needs fixed to match what is detailed in The Incredible Hulk, if anything.

A wikia contributor just added a large part of the movie Hulk to the "Background" section. It seems like such a shame to remove it, as it looks so well-done and time-consuming, but, on the other hand, while it is occasionally disputed, Hulk is generally not considered part of the universe The Avengers occurs in, while The Incredible Hulk is. So, what should we do?--50.99.247.159 02:07, November 8, 2012 (UTC) 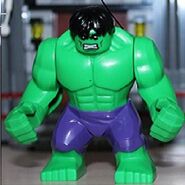 The Hulk (Avengers Assemble)
Add a photo to this gallery
Retrieved from "https://brickipedia.fandom.com/wiki/Talk:The_Hulk?oldid=1590274"
Community content is available under CC-BY-SA unless otherwise noted.