Tamah, also known as Razor Glove Hassansin, is a Prince of Persia minifigure released in 2010. He is similar to Setam, but has a different weapon, no shoulder pads, and a different Head Piece.

Some may favour spears or throwing knives but this sneaky hassansin prefers to fight up close and personal his the swift slashing swipes of his blade gloves for they could be the last you ever see. He was killed by Dastan during the attack on the sacred temple, although when Dastan turned back time, the attack on the Sacred Temple never happened, and he was spared.

Tamah carries a Spike Arm and a Blade Arm as his weapons. 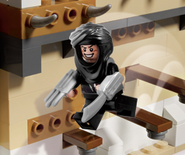 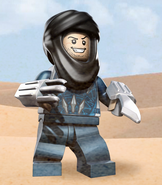