Tamara is a Pirates of the Caribbean minifigure that was released in the 2011 set, 4194 Whitecap Bay. She and Syrena feature new mermaid tail pieces. She is not featured in the video game by name, though some similar mermaids to the theme are.

Tamara has long blonde hair, which flows over her right shoulder. It is the same hair-piece used by Elsa Schneider from Indiana Jones. She has a new sand green tail piece along with a matching torso. She has a small flesh area on her tail which depicts the area where the torso merges with the tail. Her faces are: Her smirking face, and her true mermaid face.

Tamara is the beautiful and deadly young queen of the mermaids. She has confronted many individuals who searched for the Fountain of Youth. When Scrum was singing in his boat, Tamara swam up. Her beauty enchanted Scrum to fall in the water, when she suddenly sprouted fangs and attacked him. It is unclear whether he is alive or dead until a pirate pulls him up (alive) in their fishing net. 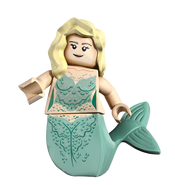 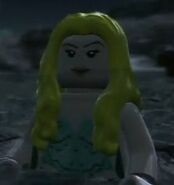 Tamara in LEGO Pirates of the Caribbean: The Video Game
Add a photo to this gallery

Retrieved from "https://brickipedia.fandom.com/wiki/Tamara?oldid=1954909"
Community content is available under CC-BY-SA unless otherwise noted.