Taskmaster is a Marvel Super Heroes minifigure that first appeared in 2014.

Taskmaster has a white hood and a white head printed with sunken skeleton face with yellow eyes and a dual expression: neutral and angry. He has a white cape and a dark blue torso with white hands. The torso is printed with a reddish brown collar with clasps for his cape, a belt across the chest, a reddish brown belt with a T belt buckle, and the suit's cut on his body. His back printing is similar to front. He has white hips and dark blue legs.

He comes with a broadsword and shield with a transparent orange stud.

Possessing "photographic reflexes" which enable him to perfectly duplicate any physical action he observes, Tony Masters is an expert in countless forms of combat. He can emulate Hawkeye's archery skills, Spider-Man's agility, and Iron Fist's martial arts abilities. However, Deadpool's unpredictable nature means it is difficult for Taskmaster to predict and copy his moves, which has led to a something of a rivalry between the two. 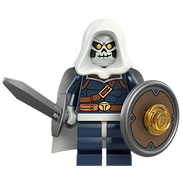 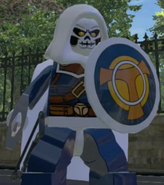