Tauriel is a minifigure from The Hobbit: An Unexpected Journey released in December 2012.

Tauriel has long, orange hair with light nougat elf ears printed on. She has a light nougat head with freckles, which is double sided. One side has her with a serious, inquisitive expression, and the other side shows her angry with her teeth bared. She has some skin showing at top of her torso. Tauriel's torso is printed on both sides, with the front featuring a brown shirt over her dark green dress and the back showing the back of her clothing. Her front shirt printing continues onto her leg piece, which is printed on the front of the legs. Tauriel comes armed with two silver Elf knives with golden hilts and a Bow.

She first appears in The Hobbit: The Desolation of Smaug as a captain of the Mirkwood Elven Guard. She rescues Kíli after the Dwarves are ambushed by Giant Spiders as she leads what we later learn is the latest in a series of missions to clear Mirkwood of their growing presence. Under Legolas' orders, she and the other guards take the Dwarves back to the Elven cavern fortress and confiscate their weapons. There, Tauriel becomes curious of Kíli's talisman and they talk for a while. Legolas watches them talking from a distance.

Later, Thranduil confronts Tauriel, telling her that as a captain of the guard she must drive the Giant Spiders out of Mirkwood. She explains that new spiders continually enter the kingdom after the previous ones were wiped out. She suggests sorties to destroy the spiders' source outside the kingdom's boundaries near Dol Guldur, but this idea is quickly dismissed by Thranduil. When she asks what will happen to other lands after the spiders are driven from Mirkwood, Thranduil says that he doesn't care about other lands. He mentions then that Legolas, his son, has grown fond of her but that she should not give him hope where there is none, because Thranduil would not allow his son to pledge to her being she is a "lowly" Silvan elf.

Tauriel and Legolas arrive to rescue the Dwarves and kill the Orcs. As Legolas runs after Bolg, Tauriel takes some athelas obtained by Bofur and uses it to heal Kili's wounds and a chant in Sindarin. Half in delirium, Kíli speaks of her great beauty and wonders aloud whether she might someday love him. Tauriel tells him to lie still but is obviously affected, and Kíli moves his hand to hold hers, meaning that he loves her. During the The Hobbit: The Battle of the Five Armies, she admits her love for Kili. Tauriel leaves Thranduil and accompanies Legolas and Bilbo to Ravenhill in order to warn Thorin, Dwalin, Fili, and Kili of an upcoming attack led by Bolg. She successfully finds Kili and the two battle against Bolg together. She is overpowered and almost killed by Bolg, but Kili sacrificed himself to save her. Tauriel mourns over Kíli's body and kisses his lips, thus showing her true love for him.

Tauriel, wielding her twin daggers, with her alternate face showing 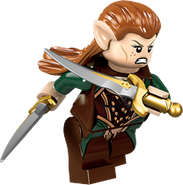 A CGI of Tauriel 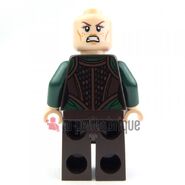 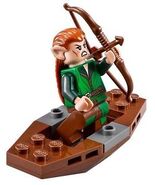 Retrieved from "https://brickipedia.fandom.com/wiki/Tauriel?oldid=1903150"
Community content is available under CC-BY-SA unless otherwise noted.
... more about "Tauriel"
RDF feed
Accessories
Dagger (Two), Bow +
Appearances
79001 Escape from Mirkwood Spiders, 79016 Attack on Lake-town +
ArticleRating
2 +
Image
Tauriel_8.jpeg +
Img1
Tauriel.jpg +  and Tauriel12.png +
Img2
Tauriel_8.jpeg +  and Tauriel_(lake-town).png +
InfoboxTemplate
Minifigure +
ShopDescription
Tauriel Tauriel is the head of the Elv … Tauriel</br></br>Tauriel is the head of the Elven Guard of Mirkwood. Her name means "Daughter of Mirkwood" and she is exactly that. While beautiful and graceful, she is strong and fiercely dangerous with her daggers, bow and arrow if anyone threatens her realm. As most Elves, she distrusts Dwarves but respects and honors the alliance that has long existed between her people and men. Always guided by her strong sense of justice, she is a beloved leader and a powerful ally to her friends.leader and a powerful ally to her friends. +
Theme
The Hobbit +
Title
Tauriel +
Txt1
Regular +
Txt2
Lake-town +
Variations
2 +
Years
2012, 2014 +