Technician Bob wears a bright red Ground Control uniform, printed with a collar, a walkie-talkie in his pocket, and the Space Port logo. He wears a white Mini Contractors Helmet. His head is printed with blue-rimmed glasses and a microphone. He appears nearly identical to Chris Com Link, aside from their hats.

When portrayed as a human in the World Club Magazine Time Cruisers comics, he is shown to have brown hair.[3]

Don Small is the Head Engineer of the spaceport and confers with Captain Jerry Walker.[2] At the Space Port Astronaut Training Centre, Don tests Astronaut Ricky Static on the Space Simulation Station's centrifuge, noting to Captain Walker that Ricky has passed all of his tests but treats everything as a joke.[4] In the World Club Magazine Time Cruisers comics, he reacts to the alarm sounding when Tim and Ingo intrude upon the space centre.[3]

In LEGO Island 2, Technician Bob is the space technician at Mission Control on the summit of Space Mountain. At the beginning of the game, Pepper Roni delivers him a pizza. Later, Bob trains Pepper on the centrifuge before sending him to Ogel Island. He acts as mission control and contacts Pepper to inform him that the Brickster has stolen the space shuttle's landing gear.

In Island Xtreme Stunts, Technician Bob does not work at the Space Port. Instead, he has his own workshop, although he still wears his Space Port uniform. 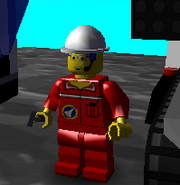