The Techno-blades are the blades that Kai, Cole,Jay,and Zane must protect and can use to hack into Nindroids, Nindroid's vehicles or anything The Techno-Blades all make use of a "blade" piece, which is exclusive to the Techno-blades, and a golden hilt, which varies in normal use. Each Techno-blade has the blade piece in a different color. Kai's techno-blade has a red "blade" piece, and this is the one that looks most like a blade. Jay's blade has a yellow blade and a chainsaw blade as a hilt. Zane's is a staff with a blue "blade", and Cole's looks like a nunchuck with a green "blade".

The Techno-Blades were made by Cyrus Borg, who hid them in a statue and gave them to the ninja to protect. They can destroy the Overlord in virus form by rebooting the computer system that he is in, but unbeknowest to also release him out of the digiverse, which is the reason why Pythor wants them.

When ninjas entered the digiverse, they used the blades to recreate their vehicles in the computer system and to hack the mainframe. The blades were destroyed when the Ninja used them to reboot the computer system. Ultimately, the blades didn't cause a difference, as it turned out that the Overlord escaped the system before he could be destroyed. 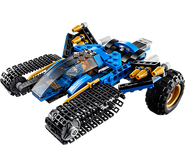 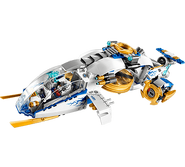 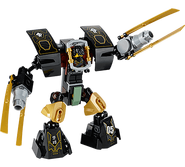 Cole's Hacked Earth Mech
Add a photo to this gallery
Retrieved from "https://brickipedia.fandom.com/wiki/Techno-blades?oldid=1698645"
Community content is available under CC-BY-SA unless otherwise noted.