This article is about the Alpha Team minifigure. For the Hidden Side minifigure, see Seymour TeeVee.

Tee Vee, alternatively formatted as TeeVee,[1] is an Alpha Team minifigure, first introduced the 2000 video game LEGO Alpha Team before appearing as a physical minifigure in 2001.

In LEGO Alpha Team, Tee Vee is portrayed as a white television (represented by a printed 1x2 brick) mounted on white minifigure legs with a black hip piece, along with black antennae and a transparent blue light bulb mounted next to the screen. His physical minifigure in 6775 Alpha Team Bomb Squad was nearly identical to his appearance in LEGO Alpha Team, but with the electric light bulb cover (part 4773) replaced with a 1x1 round plate in the same color.

In 2002, Tee Vee appears as a brick-built ROV instead of a minifigure. The ROV has a bright yellow and black colour scheme, and appears with two slight variants between 4792 Alpha Team Navigator and ROV and 4789 Alpha Team Aquatic Mech, with the latter being slightly smaller and more compact than the former.

When Alpha Team was relaunched in 2004, Tee Vee was shown to have a new android body.

In the original video game LEGO Alpha Team on which the sets were based,[2] Tee Vee assists the player, giving mission briefings, gameplay tips and tutorials, and story exposition.

In Mission Deep Sea, Alpha Team goes undersea to stop Ogel from mutating sea life, and Tee Vee appears as an ROV to allow him to help underwater. As shown in the Comic Adventure Into The Deep, Tee Vee still appears in his original form, but can activate rover mode, putting his "mind" in control of the ROV and leaving his normal body back inside the submarine. In Into The Deep, the ROV is destroyed by Ogel's mutants but is then repaired by Alpha Team; shortly afterward, it is captured by Ogel's forces and then released once Dash Justice destroys Ogel's orb machine.

Tee Vee in the intro animation for LEGO Logic 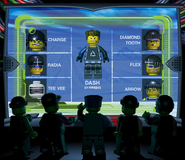 
The Alpha Team’s robot sidekick is present in every mission. Click on him to review the current Mission Objective. +, Tee Vee is the team’s lovable robot sid … Tee Vee is the team’s lovable robot sidekick.<br/>As you enter each area of the game Tee Vee will tell you where you are and give you information about what to do.Whenever you can see Tee Vee, click on him and he will repeat the objective of your current mission.eat the objective of your current mission. +  and TEEVEE