Brickipedia
Register
Don't have an account?
Sign In
Advertisement
in: Class 4 articles, Articles in need of expansion, Pages that link to Legopedia (Russian),
and 3 more
English

Teedos are small reptilian beings that prowl the wastes of Jakku, their features hidden behind mummy-like wrappings. Often found riding cybernetic pack animals called luggabeasts, they know many of Jakku’s secrets. Teedos make no distinction between individuals and the species as a whole, and are rumored to share knowledge in some unknown and perhaps unconscious fashion. Jakku’s scavengers treat them with respectful caution, wary of their unpredictable natures. 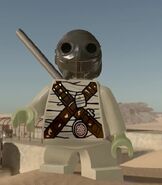 Français Русский
Community content is available under CC-BY-SA unless otherwise noted.
... more about "Teedo"
RDF feed
Appearances
75148 Encounter on Jakku +
ArticleRating
4 +
Image
Teedo-75148.frlegowiki.png +
InfoboxTemplate
Minifigure +
ShopDescription
Every member of the reptile-like Teedo spe … Every member of the reptile-like Teedo species is named Teedo, and this Teedo is no exception. Riding his cybernetic luggabeast across the Jakku desert in search of valuable scrap metal, Teedo is more than happy to snatch up the wandering BB-8 in the hopes of selling the little astromech droid – or at least the most valuable parts of him – to Unkar Plutt at the nearby Niima Outpost.o Unkar Plutt at the nearby Niima Outpost. +
Theme
Star Wars +
Title
Teedo +
Years
2016 +
Advertisement