Ninjutsu master Hamato Yoshi (Splinter) is carrying his four pet turtles through the streets of New York City when he encounters members of an alien race called the Kraang. During an altercation with these aliens, Hamato and the turtles are exposed to an alien chemical called mutagen and they undergo major physical transformations. Hamato Yoshi becomes a humanoid rat and the turtles become human/turtle hybrids. Splinter retreats to the New York City sewers, where he raises the four turtles as his sons and imparts to them his knowledge of ninjutsu. Now teenagers, the Turtles venture to the surface for the first time and learn that the Kraang is using the mutagen as part of their plan to take over New York City. The Turtles befriend the teenage April O'Neil after she and her scientist father Kirby are abducted by the Kraang. While Kirby remains a prisoner of the Kraang, April becomes an ally of the Turtles as they help her to find out where the Kraang have taken her father. The Turtles also learn that Splinter's long-time enemy Oroku Saki (Shredder) has ordered his Foot Clan to track down Splinter and his sons, and put an end to their clan.

A teaser image from the LEGO Club magazine

Digital renderings of the turtles 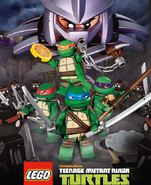 A wallpaper featuring all four turtles 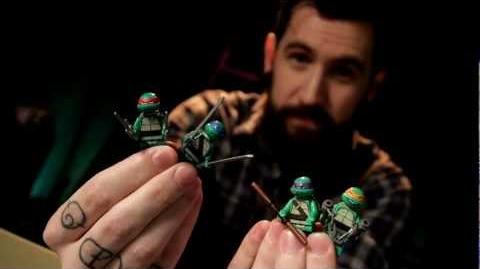 Retrieved from "https://brickipedia.fandom.com/wiki/Teenage_Mutant_Ninja_Turtles?oldid=1580026"
Community content is available under CC-BY-SA unless otherwise noted.