"Only twenty against one? The mathematical odds are extremely unfavorable...for you!"
―Terabyte

Terabyte has black legs with green lines and circles printed on them across the upper legs and in the waist. His torso is black and depicts a jacket of the same color, with green lines in a similar pattern to those from his legs. Beneath the jacket, he has a dark green shirt with a symbol that features an figure similar to a skull, colored in lime green. In the back of his torso it features a labeling that says Bad 2 the Code. His arms are black and has lime green hands. His head depicts a large grin, orange sideburns and a green visor in the eyes that have pixels printed on them. His helmet is colored in silver and covers the sides of his head, it has a transparent green circle in the front and at the upper side of it, as well as a tube in the top colored with the same color.

His appearance in 70173 Ultra Agents Ocean HQ reveals that his hair style is orange, shoulder long, similar to that used in Boromir.

Terabyte was a computer genius that was turned evil after getting trapped in a vortex. Terabyte became a dangerous hacker who pilots a mech. He uses his weapons to send out viruses that hijack technology to his advantage.

On the LEGO Ultra Agents website, he hacked Downtown and made all the technologies show his face.

In the Ultra Agents App, he climbed to the top of Astor Tower on his mech and sent viruses to Astor City. He tried to steal the Ultra Agents files, and also tried to teleport AntiMatter to earth. Both of his plans failed, and he was captured by the police.

Time later, he was found at the Ultra Agents' HQ prison, where he was interrogated by the Agents about when they would meet his boss, to which he replied sooner than you think.

When he was freed by Invizable, along with the other captured villains he escaped to open air, where the super villains started to capture the citizens of Astor City, in order to increase the AntiMatter's army.

After the battle against AntiMatter, he was seen captured in a container, along with the other super villains. 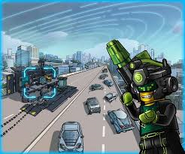 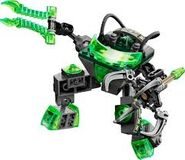