The Admiral is the leader of the Imperial Armada.

The Admiral has a bright red torso printed with a silver necklace, coat buttons, and a black belt with buckle. His hip and legs are grey. His unique face is decorated with black eyebrows, mustache, goatee, and stubble. He wears a black conquistador helmet with a white plume and a metalized silver breastplate.

In LEGO Racers, the Admiral does not wear his breastplate due to the character builder not including neck accessories. His torso is also substituted with that of the unnamed Imperial Armada soldier.

In North American LEGO Mania Magazine issues and Shop At Home catalogs, this character is simply referred to as "the Admiral" and no one canonically knows his real name, not even King Kahuka or Captain Redbeard.[1] A LEGO Mania Magazine contest was held to determine his name, with the two competing names being Billy Cannonball Cordoba and Don Diego de LEGO as well as a write-in option.[2] However, the winning name was never announced; the July-August 1996 issue merely listed three write-in names submitted by fans: Sir Sail-a-Lot, Don Juan DeMented, and Chrislego Columbia.[3] Later issues and catalogs continue to simply call him "the Admiral".

No such naming contest was held in Europe. In Bricks 'n Pieces Magazine, this minifigure appears to have been named Sergeant Speedy, given that he is shown with a speech bubble containing Sergeant Speedy's dialogue. However, it is uncertain if this is actually true given the context of the story. Sergeant Speedy was stationed at the Soldier's Outpost, which may suggest that the name belongs to the soldier minifigure included in that set. Additionally, Sergeant Speedy says this dialogue while signaling the Santa Cruz from Skull Harbour, while the Admiral is shown already aboard the Santa Cruz in this image.[4]

The Admiral was marooned on a desert island when he was a baby and found by some Islanders. Since then, he has been a sailor and became the admiral of the Imperial Armada. No one knows his real name, and since he's "the toughest sea dog to sail the seven seas", no one dares to ask!

The Admiral wears his armor everywhere, even in the bathtub, where he plays with the 6289 Red Beard Runner LEGO set to practice sinking it. His favorite activity is playing soccer with Islanders. He attempted to introduce the Islanders to snowball fights, but all the snow melted by the time he brought it north from the South Pole.

The Admiral makes a cameo appearance in LEGO Chess, only appearing in the FMV cutscenes. In the Pirates story, if the player loses the second match, the Admiral is seen aboard the Armada Flagship as they rescue Admiral Woodhouse. In the final cutscene, multiple Admiral minifigures are present among the Imperial Armada and Imperial Guards as Admiral Woodhouse brings the treasure chest back to port.

The Admiral also appears in LEGO Racers as an opponent in Circuit 7, the final circuit of the game, where he competes against the player, Rocket Racer, Gail Storm, Nova Hunter, and Black Knight on Rocket Racer Run. His minifigure parts must be unlocked by beating Captain Redbeard in Circuit 1. 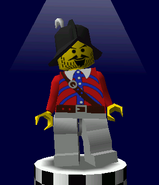 The Admiral in LEGO Racers

'Favorite food: A … THE ADMIRAL'Favorite food: A "galleon" of rocky road ice cream<br/>Favorite basketball player: David "the Admiral" Robinson<br/>Favorite football team: The Buccaneers<br/>Favorite song: Row, Row, Row Your BoatThe admiral of the Imperial Admiral is one of the toughest sea dogs to sail the seven seas. Everyone calls him "the Admiral" because no one knows what his name is. He was marooned on a desert island when he was a baby and found by some Islanders. Ever since then, he's been a sailor.The Admiral wears his super shiny armor everywhere, even in the tub. It just takes him awhile to scrub the rust stains off his neck. His favorite tub toy is #6289 Red Beard's Runner. "I like to practice sinking his ship," says the Admiral.The Admiral is a real sports fan. He especially likes to hang out with his friends the Islanders and play soccer. In the islands, they use coconuts for balls and palm trees for goals. "My scores aren't too good, but we sure eat well after the game," he says.we sure eat well after the game," he says. +  and MEET THE ADMIRAL!

Holidays in the i … MEET THE ADMIRAL!</br></br>Holidays in the islands are strange for the Admiral. Decorating palm trees and sledding down volcanoes aren't like the holidays he remembers. The Admiral once sailed to the South Pole to bring back some snow to show the Islanders, but all the snow melted except for one snowball, and who can have a snowball fight with one snowball?n have a snowball fight with one snowball? +
Theme
Pirates +
Title
The Admiral +
Years
1996 - 1997, 2001 +
Advertisement