The Angry Birds Movie is a licensed theme released on April 1, 2016. This theme's sets were based and released along with the movie of the same name. The movie itself was based on the Angry Birds video games and apps by the company Rovio. 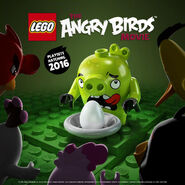 Add a photo to this gallery
view · talk · edit The Angry Birds Movie sets
Retrieved from "https://brickipedia.fandom.com/wiki/The_Angry_Birds_Movie?oldid=1987634"
Community content is available under CC-BY-SA unless otherwise noted.