The Art of the Silent Fist is the second episode of the third season of Ninjago: Masters of Spinjitzu.

After the attack in New Ninjago City, the Overlord searches for the Golden Ninja and the Techno-blades. The ninja evacuated to Misako and Sensei Garmadon's School for the Arts, only to be attacked by Nindroids. Lloyd and Garmadon evacuated from the Nindroids so the Overlord can't get his power while the ninja destroy the only source of power in the city, which gives them time to plan a way to reboot the entire system. Their plan works but it isn't the end of evil. 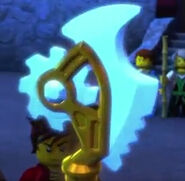 Add a photo to this gallery
Retrieved from "https://brickipedia.fandom.com/wiki/The_Art_of_the_Silent_Fist?oldid=1878362"
Community content is available under CC-BY-SA unless otherwise noted.