The Berg is an Ice Monster that appears in the video game LEGO Racers 2 as the boss of the Arctic world. He presents himself as a scary monster, although he isn't. He does not drive a car; instead he simply runs. At the beginning of the race against the player, he cheats and starts before the light turns green and while racing, he leaves giant ice spikes behind him. After the player defeats him he cries, but after some reassuring from the player he calms down and gives him large tyres. However, according to Captain Ross, he abducted an explorer who has yet to be found. He eventually appears when the player beats Rocket Racer on Xalax calling the player his friend.

He is the only known intelligent Ice Monster, or any such creature, for that matter. 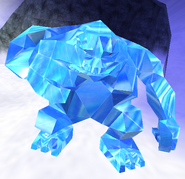 The Berg presenting the player with tyres