The Cook is a Pirates of the Caribbean minifigure introduced in 2011.

In On Stranger Tides, the Cook served aboard the Queen Anne's Revenge as a chef. The Cook took part in the mutiny aboard her. As Blackbeard, the captain, ended the uprising, he punished the mutineers and sent them into a longboat. Blackbeard had Greek fire launched from the Queen Anne's Revenge's flamethrowers at the boat and the Cook was killed. He came back as a zombie. 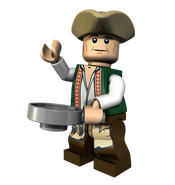 Character Token
Add a photo to this gallery
Retrieved from "https://brickipedia.fandom.com/wiki/The_Cook?oldid=2017097"
Community content is available under CC-BY-SA unless otherwise noted.
... more about "The Cook"
RDF feed
Accessories
Pan
Hat +
Appearances
4195 Queen Anne's Revenge
LEGO Pirates of the Caribbean: The Video Game +
ArticleRating
4 +
Image
Poc013.jpg +
InfoboxTemplate
Minifigure +
ShopDescription
Aboard the Queen Anne’s Revenge, the Cook serves up slop to the ship’s motley crew of sailors. But when Blackbeard needs someone to take the blame for the crew’s mutiny, he’s in for a bit of a fiery surprise! +
Theme
Pirates of the Caribbean +
Title
Cook +
Years
2011 +