"It's Alive! Alive!"
―The Crazy Scientist

The Crazy Scientist has unprinted black legs, and a white torso. The torso is printed with several buttons, and a belt holding a beaker and a pair of pliers. The belt continues around his back, with two further test tubes and a clamp wrench. His arms are white, and his hands black. He has a yellow double-sided head. One side features grey and clear goggles, and a determined expression. The other has a crazed expression, and red and grey lenses in his goggles. He has large, rubbery grey hair. 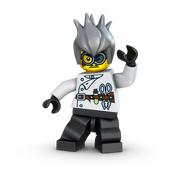 With the Monster Fighters logo

The Crazy Scientist's other face

Retrieved from "https://brickipedia.fandom.com/wiki/The_Crazy_Scientist?oldid=1875152"
Community content is available under CC-BY-SA unless otherwise noted.