When Thor was banished due to his actions on Jotunheim, Loki (who was filling in for Odin after falling into Odinsleep) sent the Destroyer to Earth to destroy his brother and everything else that got in the way. The Destroyer passed through the Bifrost Bridge and landed in New Mexico, Earth. Once there it encountered agent Phil Coulson, Hawkeye, and a team of SHIELD agents but quickly destroyed their cars before moving onto the small town. Once there it went on a rampage on the town but it encountered the Warriors Three and Lady Sif. Volstagg tried to jump it but was smacked back onto a car. But before the Destroyer could kill him, it was stabbed by Sif and briefly taken out of commission.

Once it recovered, it reformed to face Sif and blasted her off of itself. When the four tried to regroup, Destroyer blasted them into different buildings and blasted Volstagg, badly hurting him. Once everyone was at safe distance, Thor himself approached the Destroyer and begged Loki to stop the rampage and take his life instead. The Destroyer powered down its beam but smacked Thor in the face, fatally wounding him. However, as the Destroyer was walking back to the Bifrost site, Mjolnir returned to Thor and restored his powers. The Destroyer tried to blast Thor but was knocked over. Once it came back into commission Thor lifted it off the ground into a tornado. The Destroyer tried to blast Thor, but the god of thunder hurled his hammer though its head, shutting it down permanently.

Later, after Loki escaped from his cell in The Avengers and trapped Thor in his place, Coulson arrived on the scene and threatened Loki with the Revenge, a weapon designed from the disassembled Destroyer. 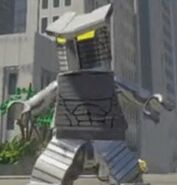