The First Spinjitzu Master is the father of Sensei Wu and Garmadon, and the Paternal grandfather of Lloyd. He was also the creator of the The Four Golden Weapons and the world of Ninjago.

In Island of Darkness

The young First Spinjitzu Master wears a straw hat, and on the back of his head is a thin braided ponytail. He wears the same white robes as Sensei Wu's original form. In the scrolls, he has long eyebrows.

The old First Spinjitzu Master also wears a straw hat and has a ponytail, but wears a black kimono (which was the same robe that Wu wears in his teen age) with white sleeves and black pants. The back of his robe features a golden image of a dragon. From the small section of his face that is shown, it appears that he has narrow eyes.

The First Spinjitzu Master was born in the realm of the Oni and the Dragons, which he left after the two groups fought to claim him for their own sides. The First Master possessed the Oni power of Destruction and the Dragon power of Creation in equal measure. The First Spinjitzu Master befriended the Firstbourne, mother of all dragons, and established a bond with her that enabled him to ride her without the need of saddle or reigns. Together they also forged the Dragon Armor, which some believed gave the First Spinjitzu Master power over the Firstbourne but in reality possessed no special qualities. He also created a martial art called "Spinjitzu", a powerful technique: when performing the art, one can become an elemental tornado by spinning quickly.

After failing to bring piece to his birth realm, the First Spinjitzu Master left behind his armor and departed, eventually making his way to a world mostly cover by water. He found this realm in chaos, brought about by a monstrous serpent known as Wojira who wielded the powers of Water and wind. Though still a child, the First Spinjitzu Master led a group of islanders and the Merlopians into battle against the beast. Ultimately, however, it was only the brave Merlopian warrior Nyad who was able to stop her, merging with the ocean itself and using its power to remove the Storm and Wave Amulets from Wojira's head, rendering her unconscious.

In the wake of Wojira's defeat and Nyad's sacrifice, the First Spinjitzu Master entrusted the two amulets to the leaders of the peoples who had joined him in battle. The Merlopians also built a temple to house the dormant Wojira, while the First Spinjitzu Master was able to create a massive island in the midst of the calmed seas. He came to be master of many elemental powers, but never mastered Water or Wind due to their association with Wojira. He did, however, found an order of Elemental Masters, whose ranks would come to include wielders of those two elements.

It is said that the First Spinjitzu Master created, or shaped, the world of Ninjago, using four Golden Weapons: the Scythe of Quakes, the Shurikens of Ice, the Nunchucks of Lightning, and the Sword of Fire. These weapons were so powerful that no mortal could possess all at once. He obtained the gold from these weapons at the Golden Peaks and then forged them at the Temple of Light. At some point he perfected the art of Spinjitzu with an ancient art called the Golden Dragon. This form was the most powerful and represented full control of all the elements, yet only he was capable of doing it.

A group of Oni later pursued the First Spinjitzu Master to his new world, determined to capture or destroy him. However Mystake, one of their number, fell in love with the world he had shaped, and joined forces with him against her brethren, who were defeated. However, in order for there to be light, there had to be shadow. Because of this natural order, an evil spirit known as the Overlord emerged.

According to the Serpentine, they were created by the First Spinjitzu Master as he shaped Ninjago, though their own prophecies warned that one day a great evil would come to wield his power. The First Spinjitzu Master eventually orchestrated a piece between the Serpentine and the humans who had come to inhabit the island, insuring that they lived separately from one another but in peace. He later had two sons named Wu and Garmadon, and he trained them for many years during their childhood in the art of Spinjitzu. However, his older son, Garmadon had been bitten by the legendary snake called the Great Devourer, which had the capacity to grow infinitely based on the amount it consumed.

After that, the venom of a snake started to take effect in Garmadon's body and turn him evil. The First Spinjitzu Master kept on checking his son's health, though Garmadon became increasingly aggressive and resentful of his father, his darkening heart believing that Wu was the favored son. The First Spinjitzu Master's works also included the Realm Crystal, a magical object that allowed its wielders to travel between realms unaided. At one point, he traveled to the Never-Realm, a place he named as such because one who traveled there from Ninjago might never return, something he himself only barely accomplished.

The First Spinjitzu Master also wrote the Scrolls of Forbidden Spinjitzu, powerful but dangerous artifacts that enhanced the powers of certain individuals. After his sons violated the treaty between humans and Serpentine and stole the scrolls to stop Aspheera, the First Spinjitzu Master took the scrolls and hid them away in hopes that they would never again be found. At some point, the First Spinjitzu Master told Wu that his final resting place would remain unknown, and that he would leave a hint for Wu to its location. He later died, his resting place being an underwater cave, filled with three challenges. His skeleton would lie at the end of the cave, along with the Realm Crystal in his hands.

Though gone, the First Spinjitzu Master would be remembered down through the age's of Ninjago history. Sadly, his death led to the greatest schism between his sons, with Garmadon attempting to claim ownership of the Four Golden Weapons. Wu acted to thwart him, and through a protective spell woven into the kimono his father had given him, Garmadon was banished to the Underworld. Years later, Garmadon managed to orchestrate his escape, and Wu pled with his brother to abandon his evil intent, noting that their father would not have wanted him to pursue this path. Garmadon replied angrily that their father was no longer there, before bitterly asserting that the First Spinjitzu Master had favored Wu.

After the Ninja succeeded in defeating the Oni invasion of Ninjago, the First Spinjitzu Master's spirit summoned that of his grandson, Lloyd, to a strange location. He commended Lloyd for meeting the destruction of the Oni with the power of creation and with love, and honored his grandson's efforts to protect the realms. He then offered Lloyd the chance to join him or to return to his life in Ninjago. Lloyd apparently chose the latter, and the master informed him that he would remember their meeting as a dream and eventually forget it entirely. 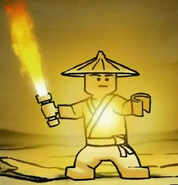 In the scrolls with an elemental blade

His face partially shown while he is checking Garmadon's wound. 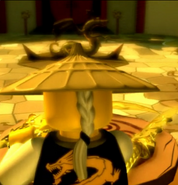 Back of his Head