This article is about the minifigure. For the set of the same name, see 3817 The Flying Dutchman.

He is entirely green and wears a tricorn hat that is also used by Blackbeard and Davy Jones. He also carries a soul bag. 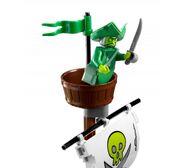 The Flying Dutchman on his ship
Add a photo to this gallery
Retrieved from "https://brickipedia.fandom.com/wiki/The_Flying_Dutchman?oldid=1855952"
Community content is available under CC-BY-SA unless otherwise noted.