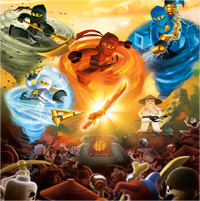 The Four Golden Weapons of Spinjitzu are four elemental weapons used in the Ninjago theme. They were created by The First Spinjitzu Master, used to create world of Ninjago. These weapons were the Scythe of Quakes, the Nunchucks of Lightning, the Shurikens of Ice, and the Sword of Fire; weapons so powerful that no mortal can posses all of them at once. These weapons play a big role in Ninjago: Masters of Spinjitzu.

The Four Golden Weapons were initially used by The First Spinjitzu Master to create the Ninjago. These weapons were forged at Golden Peak, and gold used to make them was from the Temple of Light. After the First Spinjitzu Master died, the Golden Weapons were passed down to his sons, Garmadon and Wu. At that time, it was revealed that The Great Devourer's blood had consumed Lord Garmadon's body. Garmadon attempted to steal the weapons and use them to create Ninjago in his own evil image. However, he only obtained the Sword of Fire and Nunchucks of Lightning, as his Wu took the Scythe of Quakes and Surikens of Ice. Wu refused to allow Garmadon to take the weapons, and a battle broke out. Lord Garmadon nearly won, but Wu managed to banish him into the Underworld. Wu then hid the Golden Weapons in four different locations, guarded by four elemental dragons. He gave the map of the locations to a blacksmith, who he was great friends with.

After being cast down to the Underworld, Garmadon gathered the Skulkin army to try and retrieve the map from the blacksmith's shop, as well as his daughter, Nya. (The blacksmith had died by that time.) Sensei Wu and Kai, the blacksmith's son fought back. However, the Skulkin succeeded. Sensei Wu, then formed a Ninja team, consisting of Cole (earth), Jay (lightning), Zane (ice), and Kai (fire), to take back the map and weapons.

The Ninja succeeded in stealing the map, as well as the Scythe of Quakes, Nunchucks of Lightning, and Surikens of Ice. However, the Skulkin ambushed them, taking the 3 Golden Weapons. Meanwhile, Sensei Wu had taken the Sword of Fire. Wu and the Ninja made it to the Underworld, where Samukai (with the three Golden Weapons) battles Wu for the Sword of Fire. Samukai succeeded in getting the Sword of Fire, and possesses all the Four Golden Weapons. He then attempts to betray Lord Garmadon and become the ruler of the Underworld again. Garmadon only laughs, as this was part of his plan. Samukai, possessing all Four Golden Weapons, blows up; he is a mortal and cannot handle their power. Lord Garmadon then informs that even he does not have the power to possess all the weapons. However, the weapons opened a portal to the Dark Continent, and Garmadon enters, vowing to return powerful enough to possess all four weapons at once.

The Ninja then took the weapons back to Ninjago, where they began mastering them. In "Rise of the Snakes", they Ninja were not good at using them, and Wu forbid them from using them as well. However, in "Home", the Ninja learned to handle their weapons and were able to use them in battle. In "Home", Sensei Wu taught the Ninja that they could use the Golden Weapons to imagine a vehicle and summon it. Kai could then turn his Sword of Fire into a Blade Cycle, Jay could turn the Nunchucks of Lightning into a Storm Fighter, Cole could turn the Scythe of Quakes into a Thread Assault, and Zane could turn the Surikens of Ice into a Snowmobile. In "Tick Tock", Wu explained to the Ninja that they can use their weapons to unlock their true potential; a form where they are of pure element. Later in the episode, Zane unlocked his true potential after discovering his origins. In "Once Bitten, Twice Shy", Jay unlocked his true potential after learning to be himself. In "The Royal Blacksmiths", Cole unlocks his true potential after being accepted by his father. In "The Green Ninja", Kai unlocks his true potential by rescuing Lloyd.

In "Day of the Great Devourer", the Ninja were attacked by The Great Devourer, a legendary snake that will endlessly grow as long as it consumes. The Ninja could not defeat it, and were forced to give their Golden Weapons to the four-armed Lord Garmadon, capable of possessing all four weapons. Garmadon succeeded in defeating the snake but stole the Golden Weapons for himself.

In "Darkness Shall Rise", Garmadon went to the Golden Peaks and merged the four weapons into a weapon more powerful then all of the four were before, the Mega Weapon. This new weapon had only the power to create, not destroy. Using weapon also drains and Garmadon's strength each time he used it, so he used it once a day. In "Wrong Place, Wrong Time", the Ninja went back in time and destroyed Lord Garmadon's mega weapon with the Golden Weapons from the past. The Golden Weapons then flew into the sky, being seen into the Ninjago night like a star.

Later, Cyrus Borg hid the Golden Armor in a secret place, which he kept secret even from Lloyd. The armor was later seen in a high security vault with other valuable or dangerous artifacts, such as the Realm Crystal and the Sword of Sanctuary. Garmadon and Lloyd, while fighting the Oni in the vault, learned that they feared the armor, and so took it with them as they made their escape. They brought it back to the Monastery of Spinjitzu, where it was melted down in order to reforge the Golden Weapons.

The Scythe Of Quakes

The Scythe Of Quakes

The Scythe of Quakes is one of the four golden weapons from Ninjago and was hidden by Sensei Wu in the Caves of Despair. It is wielded by Cole, and can cause earthquakes and large cracks when swung into the ground. It can also turn into Cole's Tread Assault vehicle. The weapon has four different variations.

The Shurikens of Ice

The Shurikens of Ice

The Shurikens of Ice are one of the four golden weapons from Ninjago (technically it is two but it is considered one). They were hidden by Sensei Wu in the Frozen Wasteland. They are wielded by Zane and can shoot ice. They can also turn into Zane's Snowmobile.

The Nunchucks of Lightning

The Nunchucks of Lightning

The Nunchucks of Lightning are one of the four golden weapons from Ninjago, and are wielded by Jay. They were hidden by Sensei Wu in the Floating Ruins. They have the ability to fire lightning bolts. They can also turn into Jay's Storm Fighter. There are two minor variations of this weapon. The Series's variation is completely different. They are two golden Dragon Heads held together by a bolt of lightning.

The Sword of Fire

The Sword of Fire

The Sword of Fire is one of the four golden weapons from Ninjago. It was hidden by Sensei Wu in the Fire Temple. It is wielded by Kai and it can shoot fire balls. It can also turn into Kai's Blade Cycle. In the first wave 2011 sets, this weapon was possibly represented by a regular gold katana. It is the strongest of them all.

Kai with the gold katana

The Sword of Fire from LEGO Universe.
Add a photo to this gallery 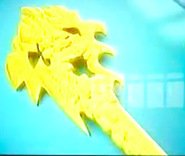 The Mega Weapon
Add a photo to this gallery
Retrieved from "https://brickipedia.fandom.com/wiki/The_Four_Golden_Weapons?oldid=1930617"
Community content is available under CC-BY-SA unless otherwise noted.