Pirates of the Carribean

The Gunner Zombie is a minifigure representing the character of the same name from the Pirates of the Caribbean theme, released in 2011. It appears in four sets and the video game.

The Gunner Zombie has a cutlass and a flintlock. He is bald and is based on the Gunner Zombie from the fourth Pirates of the Caribbean movie, with grey legs and a brown body, with decorations on the torso.

The Gunner Zombie served on the Queen Anne's Revenge, along with the Yeoman Zombie and the Quartermaster Zombie.

He is a fierce member of the crew which is trusted by Blackbeard. During the quest for the Fountain of Youth he fought against mutineers on the Queen Anne's Revenge. He also took part in the attack on the Whitecap Bay. He and the Quartermaster Zombie tried to stop the Spanish to destroy the Fountain of Youth. He died when he, along with the Quartermaster, were crushed by a falling pillar. 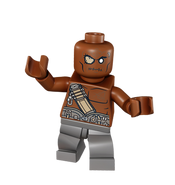 The Zombie with weapons

Retrieved from "https://brickipedia.fandom.com/wiki/The_Gunner_Zombie?oldid=1921370"
Community content is available under CC-BY-SA unless otherwise noted.