This article is about the minifigure. For the Ultrabuild figure, see 4530 The Hulk.

"Puny god!"
―The Hulk in The Avengers

The Hulk, also known as Bruce Banner, is a Minifigure in the Super Heroes theme.

As Hulk is a human with distorted proportions, he is larger than a normal minifigure. Hulk has molded black shaggy hair, his face depicts him as being angry with his mouth open and teeth showing. He is sculpted to be extremely muscular and only his arms and hands are moveable. Hulk's hands are designed to still be capable of holding minifigure accessories, and their feet. He wears dark tan pants and has huge feet the size of a 2x3 brick. Besides his face, legs and hair, Hulk's body is colored green. He is very similar to the Wampa, and the Cave Troll, both in size, articulation and being able to hold a minifigure by its legs.

This version is based on his appearance in The Avengers.

The Minifigure is made of basic minifigure parts. This version has Harry Potter's hair and a double-sided face angry and slightly angry. The torso is printed to have muscles similar to the printing on Dastan's shirtless version and has back printing to show his back. The legs are green with purple printing that represents ripped trousers. The pants show the signature purple pants, unlike the Avengers variant.

This version is similar to the 2012 variant but has purple pants and different facial printing.

His Avengers variant is used in LEGO Marvel Super Heroes. He has super strength which he can use to lift and throw large objects. He can also change back to Bruce Banner to solve problems the Hulk can't, such as climb a rope, or build. In fact, if you try and build anything with Hulk, he attempts it but can’t figure it out, so he becomes angry and kicks the blocks around.

This variant has an entirely new mold but is very similar to the old one. The main change is the hair, which is shorter and slightly spiked. Hulk's pants are also no longer torn up and have a solid cuff. This Hulk has the same face printing, but the torso, arms, legs, feet, and hands are olive green. His pants are purple with an Avengers logo and red and black stripes along the sides.

This figure is very similar to the minifigure version of the Hulk, but with olive green skin, different hair and pants to match his appearance in Avengers: Age of Ultron.

This version is in line with the other Micro figures, and as such, has short legs and a simpler cartoon-inspired design. His hair is the same as Faora's, and his face shows an exaggerated determined grin. His torso has some simple muscle printing and the top of his pants, with a belt with an "H" buckle on it.

Bruce Banner was working on recreating the super soldier serum (which created Captain America) with gamma radiation. Convinced that he had recreated the super soldier serum, he tested it on himself, which involved exposing his body to dangerous levels of gamma radiation. As a result, he became a huge green monster, which almost killed his girlfriend Betty Ross and her father, General Ross.

General Ross wanted Bruce's monster as a weapon for the military, and pursued him across the world for years. He finally located Bruce at a soda factory in Brazil, using newly recruited soldier Emil Blonsky to track and subdue Bruce. However, Bruce turned into the Hulk again, destroyed the factory, and fled.

Banner went to find data held by Betty, was reunited with her and retrieved the data. This lead to a battle at Culver University between the Hulk and General Ross, which resulted in Emil being seriously injured. Hulk ran away with Betty in his arms after he protected her from a helicopter firing at him.

Bruce and Betty then traveled to New York City to find Dr. Samuel Sterns in order to cure his "condition". Stern's formula was successful, but it only suppressed the Hulk within. Emil and General Ross arrived and captured Bruce. Emil, who was already enhanced by the super-soldier serum in him, added Bruce's blood into him and became the Abomination.

As the Abomination, Emil left a trail of destruction on the streets of Harlem immediately after, prompting Bruce to turn into the Hulk to fight him and protect the people of the city. He battled with the Abomination and won, almost killing him before Betty intervened. He ran away from a news helicopter while Emil was taken away by S.H.I.E.L.D., feeling he has more control of his power.

Later, Banner was recruited by the Black Widow and Nick Fury to help locate the stolen Tesseract (Cosmic Cube), and to be a part of a team called the Avengers, which also consists of Captain America, Iron Man, Thor, Black Widow and Hawkeye. However, he was not supposed to be there to fight as the Hulk but merely follow the Tesseract's trail because it let off gamma radiation, which Bruce was an expert in the field of. Tony Stark tried to talk Bruce into using the Hulk as a hero, to which he disagreed. During the attack on the Helicarrier, Bruce hulks out, clashing with both Widow and Thor in his anger. Fury then orders a jet to open fire on the Hulk, causing him to attack the jet and be thrown off into a building on the ground far below. After being knocked unconscious by the fall and turning back into Banner as a result, he decided to head toward Stark Tower and rejoin the others.

After Loki and the Chitauri attacked, he turned back into the Hulk and is ordered simply by Captain America to "smash". Hulk ultimately defeated "puny god" Loki and saved Iron Man from falling to his death. Bruce is then seen driving off with Stark after Thor left with Loki as his prisoner.

Tony later recounted his trauma with Aldrich Killian/The Mandarin, but Banner fell asleep and informed him that he wasn't that kind of doctor.

Three years later, Banner reunited with his fellow Avenger members (Captain America, Iron Man, Thor, Black Widow and Hawkeye) in order to steal the Chitauri Scepter from Baron Wolfgang von Strucker (who stole it after the Chitauri Attack on New York). He also reunited with other Avenger members (Scarlet Witch, Quicksilver, Vision and War Machine) in order to prevent Ultron and his army of robots whom attacked on a village on Sokovia.

After the battle on Sokovia, Banner left Earth by piloting the Quinjet until he suddenly arrive on Sakaar and was forced by the Grandmaster to compete as one of the Gladiators on the Contest of Champions.

Two years later, Banner reunited again with Thor whom he didn't know he competed with him due to lost of control. He also joined the Revengers (leaded by Thor, Valkyrie, and Loki) in order to stop Hela and her army of Berserkers on reigning on Asgard.

Hulk uses the gauntlet to bring half the population back in Endgame.

Hulk is one of the heroes called by Nick Fury to stop Dr. Doom's assembled team to retrieve cosmic bricks from Silver Surfer's board. 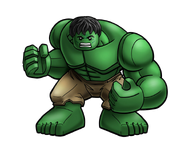 As seen on the Avengers sets box art 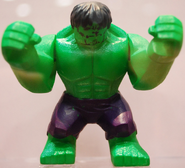 5 of the parts of Hulk, excluding the blue pins 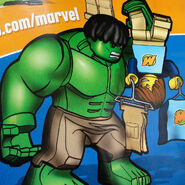 The Hulk's back printing

An ad for the promotional comic variant 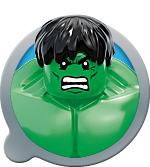 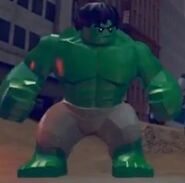 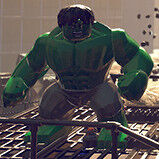 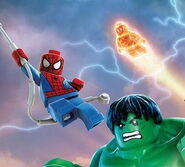 With Spider-Man and The Human Torch.

Hulk and Jean Grey in front of the Blackbird 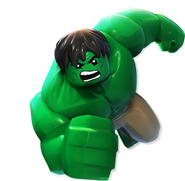 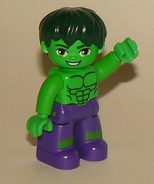 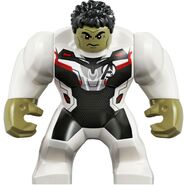