"Heroes? There is still no such thing."
―The Mandarin in LEGO Marvel Super Heroes

The Mandarin is a Marvel Super Heroes minifigure released in 2013.

The Mandarin has a combed back hair piece and a beard, both in black. His face is depicted to be serious and is printed with black eyebrows, cheek bones, and lines to give the face shape and he has a second face with his facial features bent into an angry expression. He also features a earth green cape (which is also used by Loki) and the torso and arms are earth green with light nougat hands. The Mandarin's torso is printed with his earth green robes that have gold embroidery, an earth green and olive green undershirt, and an silver circle design to represent the Ten Rings insignia is printed underneath the beard. There is back printing depicting the back of the collar and creases in the robes.The robe printing continues onto the olive green legs, which depict the robes and undershirt going onto the legs.

This variant has the same hair, beard, and double sided face as the other variant. His torso is earth green with light nougat arms and hands. The torso is printed with an earth green vest with pockets and yellow diagonal strips, his belt, a sand green undervest, and an olive green and gold lined scarf printed is underneath the beard. This variant has back printing representing the back of the belt, the creases of the back of the vest, and a little bit of the scarf poking through at the top. He has plain olive green legs.

The Mandarin is a self-proclaimed descendant of Gengis Khan who unhearted an alien ship belonging to the dragon-like Makluans. There, the Mandarin found ten powerful Makluan jewels that he added to ten rings to have all their powers. In his search to take over the world, the Mandarin has clashed with Iron Man several times.

The Mandarin was an international terrorist and claimed leader of the terrorist group; the Ten Rings (who had captured and held Tony Stark hostage in a cave, until he built the Mark 1 and broke free and also helped Ivan Vanko with his revenge on Stark). He possessed ten rings, which were the symbols and namesakes of his group.

His nationality was unknown, due to the fact he surrounded himself in secrecy, as he used many other warrior motifs and symbols and twisted them for his own use, such as Asian royal robes, a terrorist beard, samurai hair, a Captain America shield tattoo with the "A" for "anarchy" in the middle instead of star on the back of his neck, and a gun ammunition shirt. He studied South American insurgency tactics and Sun Tzu and other ancient warfare tactics. He surrounded himself with Chinese iconography, dragons, and the symbols of warlords. He was a field officer at one point. He had a hatred of America and used it to unify his group, who also had a hatred of America.

He attacked the TCL Chinese Theater in which Happy Hogan was severely injured, prompting Tony to challenge the Mandarin to a fight using the media. Mandarin had Savin destroy Tony's mansion.

With Harley's help,Tony discovered Mandarin's base and infiltrated it using a variety of homemade weapons. He found the Mandarin in his bedroom, where it was revealed that the Mandarin was just an English stage actor named Trevor Slattery that Aldrich Killian had hired to cover his evil schemes and had bribed him with as many drugs and women that he wanted, as long as he stayed in the mansion until another video needed to be made, and was oblivious to acts of the Mandarin.

During the final fight, Killian revealed he was the real Mandarin mastermind. After Killian's death, Slattery was apprehended for assisting in Killian's plans.

Slattery was later approached in prison by a man who claimed to want to know Trevor's story, however at the end of their meeting, the man revealed he was a Ten Rings operative sent by the real Mandarin. The man informed Trevor that the Mandarin wasn't pleased with him and wanted revenge. 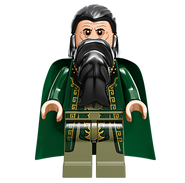 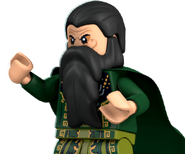 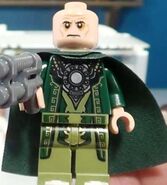 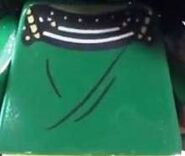 The robed variation's back printing

Add a photo to this gallery
Retrieved from "https://brickipedia.fandom.com/wiki/The_Mandarin?oldid=1648007"
Community content is available under CC-BY-SA unless otherwise noted.