The Punisher is a Marvel Super Heroes minifigure introduced in 2021.

The Punisher's torso is black with a white skull on the front, his legs are also black with white boots, his hair is the same as General Zod's. He carries a large gun similar in looks to the one he used in his first comic appearance (Amazing Spider-Man #129)

Frank Castle was a war veteran whose family was killed as a result of gang violence. Filled with rage, he donned a black outfit with a white skull, calling himself "The Punisher." As the Punisher, Castle became a bloodthirsty vigilante with no qualms against killing criminals. At the time, Spider-Man was wanted for the apparent murder of Norman Osborn, and he was next on Punisher's list. However, the two would see their differences and become unlikely allies. He would later encounter Daredevil while trying to take down local drug dealers. Even though Daredevil was furious with Punisher's methods, Punisher didn't see him as an enemy. He would later take down Kingpin with the help of Spider-Man, Cloak and Dagger. 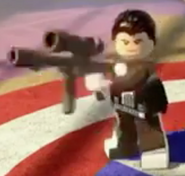 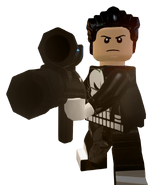