"Riddle me this, Batman: Why won't you LEAVE ME ALONE?!"
―The Riddler to Batman in LEGO Batman 2: DC Super Heroes

The Riddler, or Edward Nygma(a pun on enygma), is a villain who executes schemes involving riddles, puzzles, and word-games. The Riddler has appeared in the Batman and Super Heroes themes.

The Riddler uses the original male hairpiece in Black. He has a one sided face featuring a smirk and a purple mask with white eyes. He has a green torso, which depicts a tight green suit with a purple question mark on the chest and a purple belt. The Riddler has grey hands (most-likely because purple hands would be too expensive to produce). He uses green legs without printing.

In 7787 The Bat-Tank: The Riddler and Bane's Hideout, The Riddler is also has a simple jetpack made out of two Black teeth, two Black studs, two cones in Transparent Fluorescent Green, one Dark Stone Grey Technic Backstrap, and a Black Technic Brick.

Rather than a hairpiece, Riddler uses the Small Clown's bowler hat, but in light grey and with a black "?" print on the center and front. Riddler's face isn't very different, but his mask is higher up and his mouth has his teeth showing in an unfriendly frown. Riddler's torso has more toned muscles, a black "?" centered, and a purple belt with a yellow "?". On the back of Riddler's torso are a few lines to symbolize the shape his unitard has against his back and a continuation of his purple belt. Riddler's arms and legs are both all green, but his hands are purple, the first official minifigure to have such. He is armed with a crowbar. This variation is exclusive to 6857 The Dynamic Duo Funhouse Escape.

At the 2012 New York Toy Fair, the set-up of 6857 revealed the preliminary version of Riddler's Super Heroes variation. The bowler hat was green and unprinted. Riddler had the same face as Robin's two Batman variations. The torso had black hands (rather than purple), no yellow "?" belt buckle, a large purple question mark (rather than black), many smaller, dark green question marks scattered around the torso, and he wasn't as muscular. The legs were unchanged and he was still accessorised with a crowbar.

In LEGO Batman: The Videogame, The Riddler is identical to his appearance in 7785 Arkham Asylum, but is armed with a golden, question mark shaped staff.

On the Nintendo DS version of the video game, The Riddler also appears as "Riddler (Suit)".

The Riddler is able to use mind control on certain characters and open certain doors which require a mind control character. He attacks with his "?" staff.

Riddler reappears in LEGO Batman 2: DC Super Heroes with his appearance from 6857 The Dynamic Duo Funhouse Escape and his "?" cane that appeared in LEGO Batman: The Videogame. In this version, he cannot use mind control like he could in LEGO Batman the Videogame. He can be found at the top of Wayne tower and when defeated is available to purchase.

As a boy, Edward Nygma was fascinated with word-games, puzzles, and riddles to the point where he became obsessed with them. He would then use this obsession to test his wits against the law and turned to crime as the Riddler, leaving behind a clue at the scene which Batman always manages to solve before apprehending him. Unlike the other Batman rogues, the Riddler commits crimes behind mind games and it takes Batman's intellect to solve them rather than physical force. The Riddler has a genius intellect in constructing riddles and is armed with his "?" cane that contains weapons and computer technology.

After the escape from Arkham Asylum, The Riddler held a briefing session between his partners Two-Face, Mr. Freeze, Poison Ivy, and Clayface. They were planning a siege on the Gotham Gold Reserves, but needed several objects to do so; A Giant Key, Mutant Vine Seeds, a Freeze Ray, and Wayne Tech's Super Laser.

Clayface assisted The Riddler in retrieving a key from a bank which he needed to rob the Gotham City Gold Reserves. When the key was secured, Clayface insisted on staying in the bank to collect the gold that was there. He was then defeated and captured by Batman and Robin and sent back to Arkham Asylum.

The Riddler met Two-Face outside of the factory, where Riddler Goons experimented on it until Batman arrived. At this, The Riddler and Two-Face used Two-Face's armoured car to escape the Batmobile, which destroyed four Riddler Goon vans in the process. When the Batmobile caught up with the Armoured Car outside of Police Headquarters, Two-Face's car was destroyed. The Riddler and Two-Face split up to evade Batman and Robin. Riddler was cornered by the duo, only to be saved by Poison Ivy.

After saving The Riddler, Ivy assisted him in sneaking into the botanical gardens. They were discovered by Commissioner Gordon who ordered Police Officers to hold the gardens. The Officers were defeated alongside Scientists and Janitors who worked at the site. With the seeds secured, Ivy stayed at the gardens to tend after the plants where she was defeated and captured, while The Riddler met up with Two-Face and his reconstructed truck.

With only himself and Two-Face left, The Riddler and his partner infiltrated Wayne Tech and stole the Super Laser.

With all four items planned for the siege of the Gold Reserves in possession, Two-Face and Riddler made their move. They used the Freeze Ray to create a bridge of ice over a surrounding body of water, the vine seeds to scale a cliff, and the Super Laser to attempt to destroy the door. The laser beam rebounded and destroyed the Super Laser. With their primary weapon destroyed, Riddler and Two-Face were attacked by S.W.A.T. Agents, but managed to scale the reserves and build a device to enhance the Mind-Control technology in The Riddler's "?" cane. He took control of the Pilot in a nearby Police Helicopter to shoot down the reserve's doors. Using their different abilities, Riddler and Two-Face solved the puzzles of the interior and defeated many more S.W.A.T. Agents and Police Officers. Reaching the vault, the two made use of the defence robot to destroy the vault door, meaning they wouldn't need the key Clayface had obtained earlier.

By this time, Batman and Robin caught up with Riddler and his partner. Riddler ordered Two-Face to create a diversion. Two-Face shot a hole in a nearby barrel holding toxic waste, covering most of the floor in the deadly substance. Robin used pieces collected with his Attract Suit to create a swamp boat and reach Two-Face. In the resulting fight, Two-Face was nearly defeated, but escaped in the direction which Riddler had gone. Batman and Robin followed Tow-Face through the vault. Riddler ordered Two-Face to attack. This time, Two-Face was almost defeated, but ran to the side of The Riddler at the last moment. The Riddler then used the vault's defence laser to try and defeat the Dynamic Duo. Batman and Robin used the chromed gold to deflect the laser beams back at The Riddler until his laser was destroyed. The Riddler then changed his tactics to using the mind control technology in his "?" cane to take control of a whimpering Two-Face, and attack the Duo himself. Eventually, both Riddler and Two-Face were knocked back into a pile of gold bars, subduing them both.

They were then sent back to Arkham Asylum, in cells next to their defeated comrades; Clayface, Mr. Freeze, and Poison Ivy.

The Riddler reappears in LEGO Batman 2: DC Super Heroes as a playable character. He hides boxes around Gotham City.

Riddler is one of the villains who raids The Man of the Year award ceremony, the others being The Joker, Harley Quinn, Two-Face, and The Penguin. He listens to Joker's "acceptance speech" after he steals the trophy from Bruce Wayne with the others at Lex Luthor's table. When the Dynamic Duo arrive in the Bat-boat, Riddler flees through the stage trapdoor with Joker, Penguin, and Two-Face, leaving Harley to cover their flight.

When Harley is defeated, Riddler hid in the band-room under the stage under a giant tuba. The tuba was destroyed, and he was chased by the Dynamic Duo through the theater with his henchmen defending them. Using the stealth suit, Batman was able to see through Riddler's hiding box and defeat him using the weights attached to it.

He was later one of the villains freed from Arkham Asylum by The Joker and Lex Luthor with the Deconstructor. He attempted to escape on Two-Face's truck with Two-Face and Harley Quinn when Batman and Robin arrived.

He can be found on the top of the Wayne Tower and can be bought for 125,000 studs after he is defeated.

Riddler with a crowbar 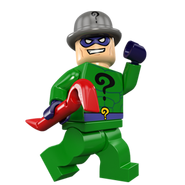 The Riddler (Suit) from the Nintendo DS game 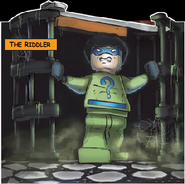 The Riddler from the online comic Asylum SINISTER!

The Riddler's jet in LEGO Batman: The Videogame

Retrieved from "https://brickipedia.fandom.com/wiki/The_Riddler?oldid=1081415"
Community content is available under CC-BY-SA unless otherwise noted.
... more about "The Riddler"
RDF feed
Accessories
Jetpack
Gun
Crowbar +
Appearances
7785 Arkham Asylum
7787 The Bat-Tank: The Riddler and Bane's Hideout
6857 The Dynamic Duo Funhouse Escape +
ArticleRating
2 +
Image
sh008.jpg +
Img1
Bat017.jpg +
Img2
sh008.jpg +
InfoboxTemplate
Minifigure +
ShopDescription
It’s never hard to guess who’s up to no go … It’s never hard to guess who’s up to no good with The Riddler around! </br>This confusing criminal mastermind is always up to no good in Gotham City as he tries to</br>stump Batman with clue-filled crimes! Once he teams up with the Joker, Two-Face and Harley Quinn, he’ll make it extra trickyn for The Caped Crusader to stop their crazy crimes! A genius and master of escape, it’s a challenge for even Batman to unravel The Riddler’s diabolical guessing games!l The Riddler’s diabolical guessing games! +
Theme
Batman
Super Heroes
DC Universe +
Title
The Riddler +
Txt1
Batman Variation +
Txt2
Super Heroes Variation +
Variations
Batman Variation
Super Heroes Redesign +
Years
2006
2007
2012 +